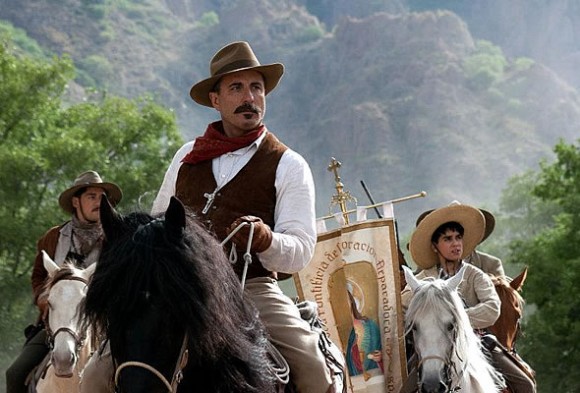 Early in the film ‘For Greater Glory’ an elderly pastor, warned that Mexican federales were storming toward his church and he faced imminent danger if he did not hide in a nearby home, said he was a priest and was already home, that he belonged in the church. ”Who are you if you don’t stand up for what you believe?” That line was symbolic of the entire film and real life Cristeros War it revealed, and emblematic of the present time.

The Knights of Columbus played a significant role in the Cristiada, and they do today in the US, in defending religious liberty.

“For me, it’s more than something that happened 80 years ago,” [Producer Pablo] Barroso said. “This is something that really is the foundation not only of Mexico, but I think also of the whole continent. I don’t know what would have happened if these brave people had not stood up for their beliefs.”

That’s the theme that makes this film coming out at this time so…providential.

Although the film is about specific historical events, the filmmakers believe that its message about religious freedom is universal.

“We live in a time where religious freedom is as tenuous as it’s ever been,” said [Director Dean] Wright. “Whether it’s in the United States, the Middle East or Asia, people are standing up and saying, ‘You can’t do that. I have the right to say what I want, to believe what I want and to practice that faith.’”

After seeing an advanced screening of the movie, Supreme Knight Carl A. Anderson said, “For Greater Glory is a powerful film that provides a compelling account of a forgotten era of our continent’s history. In celebrating the centrality of religious freedom and man’s need for God, it tells a story of enduring relevance, and is ‘must-see’ viewing for all who care about faith and liberty today.”

This message is repeated over and over by each of the film’s prominent actors, including Cuban-born Andy Garcia.

“The first stimulus for me as an actor to be a part of this movie was the notion of the quest for absolute freedom,” said Garcia. “Coming from a country where religious freedom was also curtailed and abolished, I was very sensitive to that reality and those struggles.”

Looking back on the whole experience, Kuri sees Bl. Jose’s true strength as being rooted in his courage to stand up for what he believes in.

“I think I would do that,”Kuri said, “because to defend for what you believe is the most cool thing” you could ever do…

Kuri encourages Catholics everywhere to stand up for religious freedom like the faithful Catholics of Mexico did during the Cristero War.

They are, in astonishing numbers, at the Stand Up For Religious Freedom rallies that went from huge on March 23rd to larger and more passionate last Friday, June 8. From Maine to Miami and Alaska to Honolulu, Americans turned out in public squares to boldly affirm their belief in the constitutional right to religious liberty.

Tens of thousands participated in the more than 150 events organized by the Pro-Life Action League and Citizens for a Pro-Life Society.

Actually, leaders of those two groups built a coalition of 65 religious and civil rights organizations, dedicated and determined to defend individuals and institutions from the federal HHS mandate that requires them to violate their consciences.

Interesting. Late in the film ‘For Greater Glory’, the Mexican president who launched the ruthless crackdown on religion and people of faith called for a meeting with the famous general who headed the Cristeros in defending religious rights. President Calles presented General Gorostieta with what he called a ‘compromise’, to which Gorostieta responded ‘there is no compromise of liberty.’ Freedom is absolute, he declared, and comes not from the state but from God.