Could a North-African migrant become the Prime minister of a European country in the 21st century? In the 19th century, a Greek slave rose to the highest ranks in Tunis.

“Praise be to God. To my master, may god preserve you. After our master scolded me and became angry with me, accusing me of having often acted without advising him, and of bringing my mother here from Greece without his consent […] I took refuge amongst the most humble people […] I am your slave. You have to give orders to your slave. You also have the power to forgive him. You claim I brought my mother to me without informing your Excellency. [Well,] I have no mother, nor father. You are my mother and my father. I have only you, master.”

Now conserved at the Tunisian national archives, this is an excerpt from a letter written in 1832 by a Greek slave who converted to Islam under the name Muhammad the Treasurer (Khaznadar).

His apology was addressed to his master, the Vizier (or Prime Minister) of the Ottoman province of Tunis, al-Shakir Sahib al-Taba, Keeper of the Seals.

Sahib Al-Taba, a slave himself, was born in Circassia, in the Northern Caucasus region. Today this area is part of the Russian Federation, north of Georgia, covering the modern day Russian Republics of Karachay-Cherkessia, Kabardino-Balkaria, and Adygea.

One of many accounts by slaves over the course of the 19th century, this letter, written in Arabic, takes us back to a time when men and women moved around quite differently within the Mediterranean.

Maghreb, an Eldorado for Europeans

Until the first half of the 20th century, it was rare for men, women and children to cross the South Mediterranean from North Africa in a bid to reach the shores of Europe and beyond.

On the contrary, Italians, French, Spanish and Greeks flocked to North Africa, fleeing poverty and overpopulation in their own countries. They sought their fortunes on fresh soil, in Maghreb and in the trans-Atlantic colonies.

North African (rather than European) countries were also a landing point, not only for African slaves forced to cross the Sahara but also, until the mid-19th century, for Caucasian, Georgian and Greek slaves, following their uprisings against the Ottoman Sultans in the 1820s. 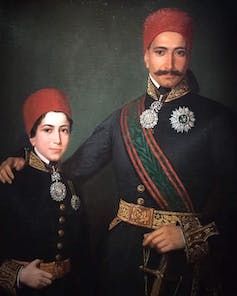 At the time Muhammad Khaznadar wrote this brief letter, Maghreb was not yet under European colonial rule. The French had taken Algiers two years earlier, and also conquered a number of cities on the Algerian coast in a series of violent attacks between 1830 and 1832.

The rest of North Africa was either ruled by the Alawite dynasty, as was the case in Morocco, or as in Tunis and Tripoli, under the authority of a governor appointed by the Ottoman Empire.

Men who came from afar, like Muhammad Khaznadar and his master Shakir, climbed prodigiously high in the social ranks: Shakir was the Vizier, the chief advisor to the Ottoman governors of Tunis. Italians, Maltese, British, French and other Europeans rushed to Tunis and Algiers and Tripoli to make money though more or less legal means, in trade, coral fishing and sometimes smuggling (tobacco, arms, coffee, etc.).

Debunking the theory of a ‘great replacement’

What has happened since the days of Muhammad the Treasurer? What brought on the upsurge in African migration to Europe [especially since the 1950s]? How did Maghreb change from a place that attracted and controlled the migration and movement of women and men from Africa, Asia and Europe, to a stopover on the way to the Mediterranean and Europe?

If we just jog our short memories and take a look back at the 19th century, we can remember all the great transformations this part of the world has undergone: the slow takeover of African markets and economies by European powers; the official abolition of slavery from the late 1840s onwards, in Tunisia and Algeria, and the gradual disappearance of slave trafficking, first in the Mediterranean and then from West Africa to Maghreb; the advent of colonization, first in Algeria in 1830, then in Tunisia as early as 1881, and Morocco and Libya in the early 1910s, just prior to the outbreak of World War I; the immigration of European colonists, whose number in Algeria would reach 1 million, against 9 million “Muslims” when the country became independent in 1962, when the pieds-noirs left the country en mass for mainland Europe; and, finally, the economic immigration of North African workers, and workers from other African nations, after World War II, to help rebuild and bolster the economies of the former colonial powers.

Talking into account all these historical events, migration from the South to the North cannot possibly be described as an “invasion” or as part of the so-called great replacement theory, as some would have us believe. It is the result of constructed economic dependence, new labour migration, exploitation, and colonial and post-colonial domination.

From a simple treasurer, Muhammad the slave became Prime minister at the beginning of the 1880s, when France took over Tunisia. His life, like that of millions of other migrants, was also shaped by the many great transformations that transpired in the Mediterranean.

The French Network of Institutes for Advanced Study (RFIEA) has hosted more than 500 researchers from around the world since 2007. This article was translated from the original French by Alice Heathwood for Fast for Word.