Lucy at start of 1st grade. Below, Lucy today, dressed for a dance.
(Photos: Beverly Beckham)

My granddaughter Lucy was born in June 2003, not so long ago, but it was before Facebook, before World Down Syndrome Day, before companies hired models with Down syndrome, before the TV show “Born This Way,” before Google was a verb making it easy for people to network and learn.

Lucy was seven hours old when a doctor, who didn’t identify himself as a doctor, walked into my daughter’s hospital room, unswaddled Lucy and announced, “She seems to be evincing symptoms of Trisomy 21.”

My daughter had only a 12-year-old cousin with her when she heard these words. Her father and I were in the cafeteria getting coffee. Her husband had gone to pick up his parents.

Often in life we are asked, if you could change just one thing what would it be? It would be this single moment. 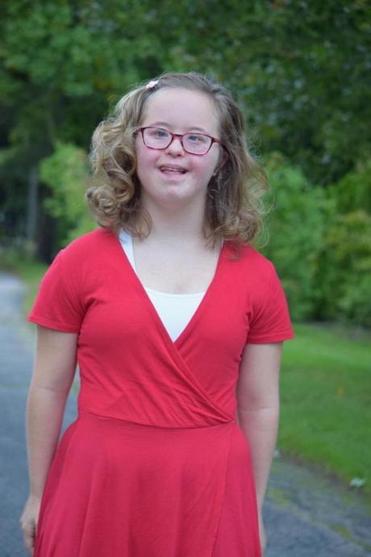 The mights put us over the edge. We held each other and cried.

I wish Dr. Brian Skotko had been with us when Lucy was born. He’s an associate professor of pediatrics at Harvard Medical School and co-director of the Down Syndrome Program at Massachusetts General Hospital. But he was still in medical school then.

Dr. Skotko’s sister has Down syndrome. He has been learning and talking to people with Down syndrome and working with them and sharing what he’s learned his entire life. He conducts studies. He gives seminars. He travels the world teaching. He writes books. He sees patients. But he’s not just smart. He’s kind.

In 2003, when Lucy was born, if he’d been a doctor, I believe he would have walked into that little hospital room with a smile in his eyes, welcomed Lucy to the world, congratulated my daughter, and waited for her husband to arrive before sharing with them the truth about Down syndrome. And the moment that changed our lives would be a different moment, a moment of comfort that we could look back at, not a moment still full of despair.

It’s the preconceptions that are bad, he says, that make people fear. We had preconceptions: People will laugh at her. She won’t have friends. She’ll never work. She won’t be happy. We’ll be ashamed.

Dr. Skotko is changing these preconceptions. In his most recent study of 2,600 families in the United States and the Netherlands, he and his Dutch counterpart asked parents to rank their child’s functional abilities in 11 areas: walking, eating, speaking, grooming/personal hygiene, reading, writing, preparing meals, working at a job, going on dates, traveling independently, and living independently.

What the study showed, among other things, is that most people with Down syndrome could walk by 25 months, speak to be understood by 12, take care of their personal hygiene by 13, and work independently by 20.

I wish someone had said these words to us.

Dr. Skotko says that “successes are greater and lives richer today” for people with Down syndrome, because we, as a society, believe in them. They go to school. They learn. They get good medical care. They’re active and involved.

So many people love Lucy. I’m only one. I believe that Lucy transforms hearts. What I know for sure is that she fills mine.

Beverly Beckham is a columnist for The Boston Globe, where this article was first published. She can be reached at bev@beverlybeckham.com. Republished with permission of The Boston Globe.