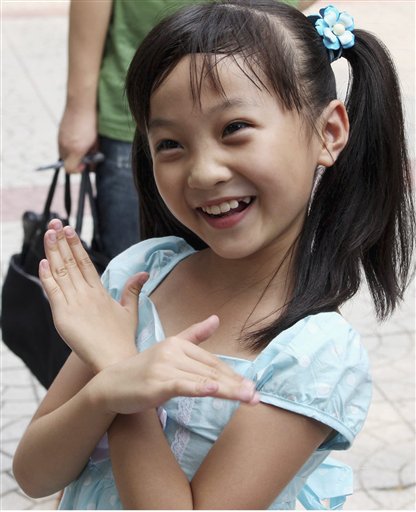 So, the footage of
the "footprint" fireworks was digitally inserted in the TV
coverage of the opening ceremony of the Beijing Olympics. And Lin
Miaoke, the adorable nine-year-old "singer," was miming the
Ode to the Motherland, as seven-year-old Yang Peiyi's voice floated
over the 90,000-person crowd and was transmitted across the world.

Peiyi wasn't pretty
enough; Miaoke's voice wasn't pure enough. So what's wrong with a
combination that results in the best of both worlds? Why has this
story made front-page headlines in western democracies and elicited
so many strong negative reactions? Have we overreacted?

I believe the answer
is no, and that our immediate reaction was based on a strong moral
intuition that something was wrong. So far, however, we haven't fully
identified what that is. To do so, we need to explore the ethical and
values issues implicated in this incident. They include deception,
integrity, authenticity, trust and the search for perfection.

But, first, a word
of warning: There is almost certainly a cultural miscommunication or
even clash in this situation. My guess is that it never occurred to
the Chinese how their approach would be seen by people from other
cultures.

Western democracies
are intensely individualistic cultures. Indeed, the highly
individualistic western approach is manifestly obvious in the media
stories reporting this incident, whether in the New York Times or a
local TV news report. The entire focus is on Peiyi and how cruel it
was to tell her she wasn't pretty enough and how hurt she must have
felt at being excluded — which, I hasten to add, the journalists are
right to recognize as a wrong.

In stark contrast,
Chinese culture is an intensely collectivist one — if two girls are
more "perfect" than each alone, and that benefits the
collectivity, the Motherland, go for it.

That difference
means we need to cut the Chinese some slack in regard to this
incident, not just to be fair to them, but also in our own long-term
interests of trying to cross the divides between us, and certainly
not to make them wider.

Deception is the
central issue involved and deception is always ethically suspect. But
does this deception really matter? Leaving aside the hurt to Yang
Peiyi from being dumped at the last minute and her voice still being
used (it's hard to imagine that the issue of consent to such use was
even considered), seeing the opening ceremony as grand theatre would
give the organizers permission to use techniques that allow the world
audience to suspend its disbelief. So why were we so shocked?

Unlike the situation
that prevails in relation to the theatre, we the audience did not
agree to be deceived. The ethical problem is intentionally presenting
as real something that is not real. That is to breach trust, and it
is this breach that is at the heart of our concern.

The opening ceremony
incidents might also have shocked us to a degree beyond what seems
reasonable at first glance, because of their context: The deception
contravened the very spirit of the Olympic Games — the inspiration
generated by the gathering of the "youth of the world," the
noble aspirations, the no-cheating-with-drugs, "spirit of sport"
ethos and its espoused values. It came across as cheating, as a
breach of trust. Breaches of trust are often experienced as a
betrayal; this was a betrayal of the Olympic spirit.

The word integrity
frequently arises in discussions of trust. In 2005, integrity was the
most frequently searched word in Webster's On-Line Dictionary. The
Oxford English Dictionary defines integrity, in a moral sense, to
include: Soundness of moral principle; the character of uncorrupted
virtue, esp. in relation to truth and fair dealing; uprightness,
honesty, sincerity. This definition could be used as an advertisement
for the spirit that is meant to inform the Olympics, cynical as we
might sometimes be about the authenticity of such a statement in
relation to a mega event with enormous commercial spin-offs.

Integrity is at the
core of ethics and ethical conduct, and an essential condition
precedent to implementing all of our most important personal and
communal values. And integrity is the beating heart of democracy,
justice, and respect for human rights. These are the values and
principles on which, in western democracies, we build organizations,
institutions, and the state itself. Without integrity, these values
and principles cannot be implemented and they, and the institutions
built on them, die.

The fact that much
of the world is worried about justice, respect for human rights, and
ethical conduct in China, and hopes one day to see democracy in that
country, might also help to explain why there has been such a
powerful negative reaction to what is, on its face, a minor deception
in the opening ceremony.

Acting with
integrity is also linked to maintaining social trust, a central
component of what is being called "social capital" — the
accumulated common good that we need to maintain a healthy society of
the kind that most of us would want to live in. A culture of social
trust is difficult to establish, fragile, and easy to destroy. The
espoused goal of the Olympics is to build worldwide social trust and
certainly not to damage it, as the opening ceremonies incident might
have done.

In general, we trust
what we can perceive directly with our senses — what we can see or
hear or touch. But virtual reality means things that are not real can
seem real to our senses and that has resulted in an overall loss of
trust in society as a whole. If that loss is to be halted, it's
especially important that the media can be trusted not to deceive
their audiences. Both the miming incident and the "footprints"
one need to be examined from this perspective — although again, like
the former, at first glance, the latter seems a minor liberty to
take.

I've often mused on
why seeing the original of a famous painting is not only different
from, but much more exciting than seeing an exact copy. Or we can
think about how antiques lose their value if they are refinished —
when the effects of the many human hands that have touched the
antique have been erased, we consider that the antique is no longer
authentic, no longer unique, no longer the "real thing";
its priceless intangible essence is gone. In fact, although in one
sense we might regard refinished antiques as more perfect, less
blemished, we value them less because in our touching them to alter
them, they can no longer touch our imagination with the same
profundity. Seeking the "perfect" little composite girl
means the same is now true of the Beijing Opening Ceremony.

Then there is the
question of authenticity: What is required for the Olympic Games to
be authentic in their very essence, without which that essence is
lost? One important element is that athletes must compete only on the
basis of their own natural talent, unenhanced by prohibited means
such as drugs. But the Games, as a whole, must also be authentic.

The opening ceremony
faced the Chinese authorities with a choice between authenticity and
perfection, as they saw it. Their choices were a) to go with
authenticity at the expense of the perfect; b) to chose the "perfect"
but to be transparent about it up front and disclose this choice; or
c) to do what they did. Ethically, it was the wrong choice. Often,
the search for perfection is just that.

Margaret Somerville
is director of the Centre for Medicine, Ethics and Law at McGill
University, and author of The Ethical Imagination: Journeys of the
Human Spirit.