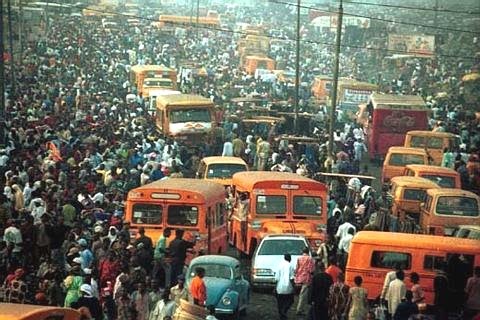 The United Nations
recently published its two-yearly update of world population projections.
These suggest
that Nigeria
could rise to 725 million people by 2100. Western media are shrilly calling
for Nigeria to put a check on her population growth.

No way, sorry. We Nigerians are rejoicing.

Africans love children. First for financial security. In the past
children helped in the farms and the more of them the better. Today, with
little or no social security, children are needed to support their parents in
old age. Their contributions constitute an informal pension scheme. And having more
children means a better pension.

Second, many children ensure that we avoid the problem of ageing
populations. We know that in Europe and America, birthrates are far below
replacement level. Their populations are ageing and a huge pension debt is resting
on the shoulders of a shrinking number sof their working youths. A day of
reckoning is looming for them. Nigerians want to avoid this.

Third, our large population supplies our economy with the dynamic and
youthful workforce it needs to grow, as well as huge markets for all types of
businesses.

Why are Westerners so nervous? Perhaps they believe that Africans will
consume all the food. Critics of large population argue that population grows
geometrically and food production arithmetically and that soon the human
population will outstrip food production and we will all starve. This theory
was first floated by Thomas
Malthus.

What Malthusians fail to take into consideration is the human spirit of
enterprise. Necessity is the mother of invention. This was the case with the
breakthrough of Norman
Boulaug, the famous scientist who invented high yield crops. Even though Boulaug
did not realize it, he had refuted Malthus.

Nor is our large population the primary reason why we are poor. “For these countries to overpopulate themselves like this is a burden
on themselves and the world. They are driving themselves into poverty. I
suppose they will be expecting other nations to accept their overflow when
their irresponsibility makes life in their own countries unbearable,” sniffs
a Malthusian reader of The Economist. “High rates of population growth is
the number one indicator of under-development,” shouts another.

Such nonsense is often based on ignorance. Even that paragon of
exactitude,
The Economist, mixed up Niger and Nigeria in its comment on a graph of
population growth. But this is a salutary mistake. Let’s compare the two
countries. Niger has a population of 15 million and suffers from high
unemployment, poverty and an unskilled workforce. It is poorer than Nigeria
with its 150 million people by a long margin. Are population and poverty really
linked?

The real reason for poverty is corrupt rulers, not a lack of birth
control.

Most Africans are ruled by sit-tight leaders who are supported by Western
countries because they guarantee secure access to resources. “Rivalry
between the United States and the USSR for the rich resources of Congo
culminated in General Mobutu Sese Seko’s rule, an extremely corrupt regime that
lasted 32 years and sapped the country of its income and stability,” says Paul
Johnson in his book Modern Times. African democracy
– with some exceptions like Ghana and Botswana — is replete with
power-hungry men who cling to power even if it destroys their country. Just
think of Kenya, Gabon and recently the Ivory Coast. Such men loot and steal the
resources entrusted to them for the development of their people. In many cases they
stash their loot in Western banks while the Western governments look the other
way.

In
2009 US Secretary of State Hilary Clinton flew around Africa and spoke
tough words to many African strongmen. But she sadly refused to comment when asked
what the US and its allies are doing to ensure that embezzled funds are
returned. Surely this evasive and insincere attitude keeps many Africans poor.
Until corrupt leaders know that Europe will not shield them because of their
wealth, they will not stop bleeding Africa
dry.

Yet the Western propaganda
that people make us poor blares on. It is often parroted by our own local media
and now many Africans fear having many
children.  When I was young, I was taught
that the world was overpopulated by my primary school teacher. My relatives complained
about my mother’s seven children. “A modern woman,” they said,
“shouldn’t have so many.”

But we all grew up to be healthy, normal adults and are now a great
source of joy and support to my mother and father in their old age. Many of those
relatives are envious because in their twilight years they have to deal with few
children whom they spoilt silly.

The comfort of a small family is deceptive. Many young people in
advanced countries are so spoilt by luxury that even the smallest setback feels
intolerable. Euthanasia and birth control result from an inability to cope with
suffering, pain and self denial. As one American lady said to me: “My
biggest fear is suffering and I am so scared of pain.” No wonder they have
high suicide rates!

According to The Economist,
“many people in the rich world live alone and die alone.” Even in the
US, white
people will be in minority in the next ten years because of their low birth
rate.

Nigeria
and other African countries stand a good chance of becoming world leaders in
the coming decades. They will helping Europe and the US to fill gaps left by
acute shortages of manpower. Perhaps it is a sign of the times that a Nigerian father
of five is the new head of the United Nations Population Fund. “A world of 7
billion is both a challenge and an opportunity,” says Dr Babatunde
Osotimehin.

I totally agree with him.


Chinwuba Iyizoba is an electrical engineer in Enugu,
Nigeria.