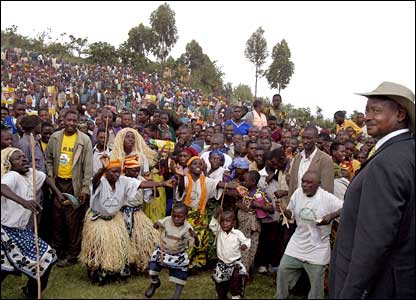 KAMPALA, UGANDA — "Kampala homosexuals speak out" was the stark headline on the front page of New Vision, a Ugandan daily, last month. The shock waves were out of all proportion to the matter-of-fact tone of the article and a photograph of some 30 masked member of Sexual Minorities Uganda, or SMUG for short, at their first press conference. "Please leave us in peace. Stop persecuting us. God created us this way. We are God’s children as well," they shouted. Their leader, Victor Juliet Mukasa, is an outspoken transgender lesbian.

The notion of "gay rights" is baffling to most Ugandans. More cosmopolitan folk know that such things do happen in the decadent West or in decadent South Africa (but only because the whites have conjured them up). The reaction was immediate: letters to the newspapers, opinion polls, columns in the press, a street march organised by the churches (mainly Protestant), and comments by the President and the Attorney General. At the church rally, some were waving placards like "Arrest all homos". Political correctness has not arrived in Uganda yet.

Nonetheless, there is a progressive minority here, especially in the media, and they supported the demonstration. An FM radio station has been airing a talk show mocking opponents as "illiterate peasants", and featuring gays and Gaetano Kagwa, Uganda's gift to the Big Brother "reality TV show" (back in 2003, actually). And, as usual, newspapers have been trying to give readers both sides of the story, reprimanding the faith-based groups for not being "understanding" enough.

In the Ugandan penal code homosexual acts are a crime. "Carnal knowledge of another against the order of nature" is punishable with life imprisonment. To make things absolutely clear, in 2005 President Yoweri Museveni signed into law a constitutional amendment banning gay marriage. "Marriage is lawful only if entered into between a man and a woman," it says, and "it is unlawful for same-sex couples to marry."

Musuveni's intransigence has not been overlooked by progressive activists. The lobby group Human Rights Watch says that the government is promoting "state homophobia" and has called upon the President to respect the UN Human Rights Committee's ruling that sexual orientation must not be grounds for discrimination. Canada and the Netherlands have pressured Uganda to change its laws or increase rights for homosexuals.

The SMUG press conference was timed to coincide with the lead-up to the Commonwealth Heads of Government Meeting in Kampala in November. The panjandrums of the former British Empire will gather in Kampala, together with their camp followers and members of the fourth estate. It will be an ideal time to apply international pressure on the government to move into the 21st century on gay rights.

Rev. Fred Mwesigwa, head of teacher training at the Uganda Christian University, an Anglican institution, sees the move of SMUG as "preparing Ugandans for a new dispensation of a permissive society that a significant minority in the Western world would like to see." If Ugandans concede ground to homosexuality, he warns, more is yet to come; he then lists the wide range of aberrations that the West has legalised, and which would horrify the average Ugandan, or Nigerian or Somali

Will Ugandans give way? Ugandans are hospitable people. Perhaps this is what the orchestrators of this campaign are banking on. Uganda, they think, is a softer option than Kenya or Nigeria, where the resistance is more likely to turn nasty.

But it is unlikely. A few days after the press conference, an Anglican (Episcopalian) bishop from the United States was ordained in the Church of Uganda to serve Episcopalians who do not agree with the ordination of an openly gay bishop. The event had to be held in the open air, to accommodate the thousands who attended. A couple of days earlier a similar ordination had taken place in neighbouring Kenya, where two American bishops were ordained by the Anglican Church of Kenya.

SMUG is not likely to give up. They do not just want to be accepted or left in peace. But there is little chance that their progressive ideas will prevail in Uganda. A recent survey by Nairobi market research company, The Steadman Group, found that more than 90 per cent oppose homosexuality and only four per cent are in favour of legalising it. The African public is opposed, not out of stubbornness or "conservativeness" or anti-Western feeling, but because being so close to the realities of life and nature — most of them very harsh — they regard homosexuality as a terrible abomination. And no amount of Western sputtering is likely to change that.