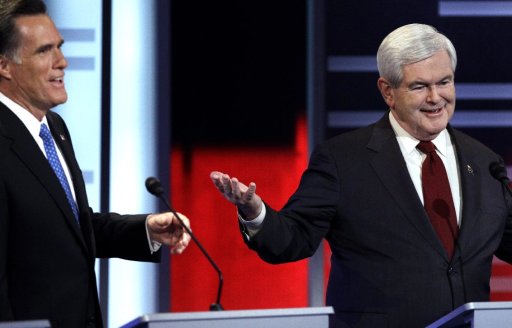 So here we are, a few weeks away from the first primary elections, with more debates to analyze and more media handicapping of party hopefuls and pundits saying exactly opposite things about the contenders.

There are voters committed to voting for Barack Obama again no matter what, and those who already have decided upon one of the Republican candidates as their favorite, the contender most closely aligned with their values and viewpoints, and most likely to beat Barack Obama. For the rest of us, these GOP debates are…if not illuminating and inspiring…context.

There was another one last Saturday night and will be another one this Thursday night and it’s all information that should go in the mix. I’ve been watching and listening to both the candidates and the pundits, and having done this for a long time as a veteran journalist, I must admit this one is unlike anything I can recall. The GOP is really split, voters and even conservative media are split, and it seems to be mainly between candidates Romney and Gingrich, who has recently gone from discounted to the main ‘not-Romney’ candidate (which has been a consistently odd category) to the de facto top candidate in polling.

The so-called ‘values voters’ are even all over the place, though I’m reluctant to use that term, because everyone is a ‘values voter’ and it just depends on whose values you’re talking about. Someone’s values will prevail. So the distinction is between traditional social/moral values and what we know as progressive secular liberal values.

During the Saturday debate, the Twitterverse was alive with activity giving play-by-play analysis on who won virtually each question, much less the whole debate. At times it was Rick Santorum, Mitt Romney, Newt Gingrich, sometimes a thumbs up to Perry, and a nod to Michele Bachmann a couple of times at least. I keyed in on the posts most influential in the ‘so-called values voters’ orbit and they were confounding, because they were either weighing in for Mitt or for Newt.

Which is precisely where we stand right now. NPR is one of many media who sees Newt in the lead.

Judging by the attacks on Newt Gingrich at Saturday’s GOP debate in Des Moines, Iowa, the former House speaker is the man to beat in the Republican presidential field.

The past few weeks have seen a remarkable turnaround for Gingrich’s campaign.

He’s holding on to frontrunner status.

With just over three weeks until the first nominating contest, Bachmann — as well as other contenders, Ron Paul, Rick Perry, Rick Santorum and Jon Huntsman — are vying to get a leg up over Gingrich, who has taken the recent lead in polling, and Romney, who has cast himself as the de facto nominee to challenge President Obama when all is said and done.

Which is why this WSJ op-ed piece by Peggy Noonan is getting such buzz.

That’s the problem with Newt Gingrich: It’s all true. It’s part of the reason so many of those who know him are anxious about the thought of his becoming president. It’s also why people are looking at him, thinking about him, considering him as president.

Ethically dubious? True. Intelligent and accomplished? True. Has he known breathtaking success and contributed to real reforms in government? Yes. Presided over disasters? Absolutely. Can he lead? Yes. Is he erratic and unreliable as a leader? Yes. Egomaniacal? True. Original and focused, harebrained and impulsive—all true.

Do you want evidence he’s a Burkean conservative? Start with welfare reform in 1996. A sober, standard Republican? Go to the balanced budgets of the Clinton era. Is he a tea partier? Sure, he speaks the slashing lingo with relish. Is he moderate? Yes, that can be proved. Michele Bachmann this week called him a “frugal socialist,” and there’s plenty of evidence of that, too.

One way to view this is that he is so rich and varied as a character, as geniuses often are, that he contains worlds, multitudes. One senses that would be his way of looking at it. Another way to look at it: In a long career, one will shift views, adapt to circumstances, tack this way and that. Another way: He’s philosophically unanchored, an unstable element. There are too many storms within him, and he seeks out external storms in order to equalize his own atmosphere. He’s a trouble magnet, a starter of fights that need not be fought. He is the first modern potential president about whom there is too much information.

What is striking is the extraordinary divide in opinion between those who know Gingrich and those who don’t. Those who do are mostly not for him, and they were burning up the phone lines this week in Washington.

Those who’ve known and worked with Mitt Romney mostly seem to support him, but when they don’t they don’t say the reason is that his character and emotional soundness are off. Those who know Ron Paul and oppose him do so on the basis of his stands, they don’t say his temperament forecloses the possibility of his presidency. But that’s pretty much what a lot of those who’ve worked with Newt say.

This is getting a lot of press, as a fair, honest, accurate and somewhat scathing analysis of the searing mind of Newt Gingrich. Noonan understands inside-the-beltway Washington politics from the Reagan days forward (if that’s the right direction of reference), and like it or not she has good insights into the Republican establishment as well as the newcomers.

The antipathy of the establishment not only is not hurting him at this early date, it may be helping him. It may be part of the secret of his rise. Because establishments, especially the Washington establishment, famously count for little with the Republican base: “You’re the ones who got us into this mess.”

Republicans on the ground who view Mr. Gingrich from afar, who neither know nor have worked with him, are more likely to see him this way: “Who was the last person to actually cut government? Who was the last person who actually led a movement that balanced the federal budget? . . . The last time there was true welfare reform, the last time government was cut, Gingrich did it.” That is Rush Limbaugh, who has also criticized Mr. Gingrich.

Exactly. Which reveals the confusion among the base of GOP supporters.

Those who know him fear—or hope—that he will be true to form in one respect: He will continue to lose to his No. 1 longtime foe, Newt Gingrich. He is a human hand grenade who walks around with his hand on the pin, saying, “Watch this!”

What they fear is that he will show just enough discipline over the next few months, just enough focus, to win the nomination.

Weekend news panels were at odds over where the Republican party stands and who may be the frontrunner and what it all means for the campaign to beat Barack Obama.

One of the networks ran an interesting clip from a January 2008 Democratic candidate debate specifically with tense exchanges between Hillary Clinton and Barack Obama. It was good historical context for the current GOP debates. The more animated the tension and drama between the top two party candidates, the more the debates clarified the differences and drew out the base to engage the political process and support a candidate.

So who best represents the pro-life values of the Republican party right now? It’s no more unified than the Democrats were in 2008. And that’s okay. There’s one more debate before the primaries begin January 3rd in Iowa. And a long way to go after that.