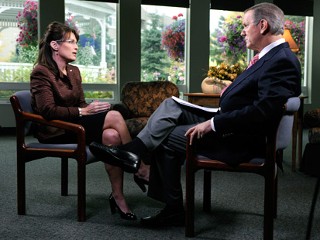 If you just read the media coverage of it since it started airing
these past couple of nights, you would think Palin was shown for a
fool, extreme in her religious beliefs (see post below), dishonest in
her portraying her own state policies, unprepared for the weighty
questions of government.

Then there’s the reality of seeing the interview. I watched it last
night aired again in full on ABC, and was astounded by Gibson’s
flagrant condescension during the entire thing. He treated Palin with
disdain, disrespect, distrust and impatience, and made himself look
more unprofessional than I’ve ever seen him before. He cut her off
before she finished answering questions, and in the editing process cut
her off even further. The jump cuts in the piece were at times jarring.
It’s hard to make her look bad, but they tried their best.

This piece by Charles Krauthammer
captures it well, dismantling just one of the criticisms the press is
lobbing around. They should use it as a primer themselves on the
weightier questions of government. Seems that behind their sneers, the
press, and Mr. Gibson, are actually uninformed about ‘the Bush
Doctrine’.

There is no single meaning of the Bush doctrine. In fact, there have
been four distinct meanings, each one succeeding another over the eight
years of this administration — and the one Charlie Gibson cited is not
the one in common usage today.

He asked Palin, “Do you agree with the Bush doctrine?”

She responded, quite sensibly to a question that is ambiguous, “In what respect, Charlie?”

Sensing his “gotcha” moment, Gibson refused to tell her. After
making her fish for the answer, he grudgingly explained to the
moose-hunting rube that the Bush doctrine “is that we have the right of
anticipatory self-defense.”

There are actually four succesive Bush doctrines, which you probably
won’t hear explained in most major media. Gibson was stuck on the third
one, though he wouldn’t answer Palin’s request to clarify. The press
turned that look of inquiry on her face as a ‘deer in the headlights’ gotcha moment. But Gibson’s smugness was unfounded because it was uninformed (besides unprofessional).

Gibson was…unaware?….that the current understanding of the most recently rendered Bush doctrine is the fourth one.

It was most dramatically enunciated in Bush’s second
inaugural address: “The survival of liberty in our land increasingly
depends on the success of liberty in other lands. The best hope for
peace in our world is the expansion of freedom in all the world.”

This declaration of a sweeping, universal American freedom agenda
was consciously meant to echo John Kennedy’s pledge that the United
States “shall pay any price, bear any burden . . . to assure the
survival and the success of liberty.” It draws also from the Truman
doctrine of March 1947 and from Wilson’s 14 points.

Read the whole piece, it’s informative in the current political climate and especially going into the debates.

Here’s another breakdown of the interview, and the current political climate. Good line at the end…

And that’s why the Democrats are so frazzled. How do you go after a shooting star?