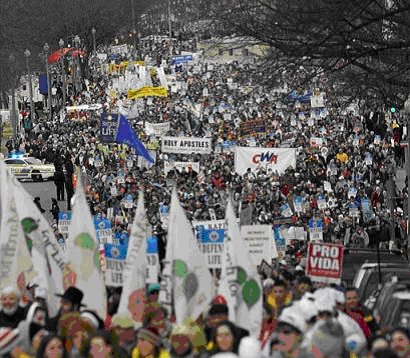 This election, candidates and campaigns are as focused as ever on demographics. But this year, the ‘Woman Vote’ has either hit a new stride, or been thrust into a endurance marathon. The competition over who speaks for women hasn’t been this strong since the original feminists emerged. That competition has re-emerged because their voices and message have been subjugated since Roe.

Every year since Roe, the March for Life rally on the Mall of Washington has continued to draw larger numbers of pro-life advocates, well over 200,000 participants from around the nation and the world, braving some of the worse winter weather and other hardships  and winding up joyful and energetic in the harshest conditions to stand up for the right to life.  And they’re increasingly young participants.

So in this election year madness with the HHS mandate calling contraception, morning after pills and sterilization procedures ‘women’s preventive health’, and enforcing it on virtually all employers’ health care plans  no matter whether it violates their conscience or morally informed beliefs about the dignity of all human beings…or not…the issue is prominent in politics and public debate.

The ‘Women Vote’ has become a key battleground for candidates, as if it were monolithic. Stabs have been made to shore up support for the HHS mandate, or at least the appearance of it, and they have fallen way short of anything significant.

The other day, there was a ‘We Are Women’ rally, which drew a scattering but got shored up by hyperbolic media. Take this report, for example:

Women across the country participated in “We Are Women” rallies on Saturday to protest state legislation limiting access to contraception and abortion. Hundreds of advocates gathered in Kansas, Colorado, Virginia, Florida, Arkansas, Idaho, and Oklahoma to demand that lawmakers abandon efforts to undermine women’s health.

“Today’s rally was part of a national movement that has had enough of the war on women,” Kansas rally organizer Kari Ann Rinker said.

This is sheer sophistry, an exercise in wordplay. There is virtually unlimited access to abortion and contraception in this country. The aggression over moving the bar has been on the side of abortion and contraception activists to make it now a luxury paid for by employers and everyone else in spite of birth control pills posing dangers that undermine women’s health. Oh, the irony.

What isn’t being talked about is that the new mandate also pre-disposes women to serious long term and permanent health problems. In conjunction with the defense of both religious liberty and the spiritual well-being of women, we must also refute the absurd and deceptive statement that “women are healthier on birth control.”

Providing free hormonal birth control to women under the guise of ‘preventative services’ and ‘women’s health’ is a lie and women of all faiths deserve to know the truth.

Hormonal birth control methods can enter the body in various ways. These ways include ‘The Pill’ (by mouth), the Mirena IUD (Intrauterine Device), the implant (placed under the skin), ‘the Patch’ (absorbed through the skin), and the Vaginal Nuvaring. There are many other estrogen -progestin name brands that can be added to this list. Any way you name it, these hormone drugs dispense poison into a woman’s body.

Perhaps HHS Secretary Kathleen Sebelius should inform her President of the following before he makes additional statements to the press like “it is cheaper to prevent than to treat.” Consider this:

— Since 1975 there has been a 400% increase in “in situ” breast cancer among pre-menopausal women under 50 years old. This mirrors the increased use of birth control over these same years. (“In situ” is a medical term which means “at the location”.

— A Mayo Clinic study confirms that any young girl or woman who is on hormonal birth control for 4 years prior to their first full term pregnancy increases their breast cancer risk by 52%.

— Women who use hormonal birth control for more than 5 years are four times more likely to develop cervical cancer.

— The International Agency for Research on Cancer (IARC), a research arm of the World Health Organization, classifies all forms of hormonal contraception as a Group 1 carcinogen. This group of cancer causing agents also includes cigarettes and asbestos. Why is it that the FDA can require cigarette manufacturers to place warning labels and real life photos of corpses on cigarette packages to warn consumers of the health dangers yet they, in turn, take an equally harmful substance (hormonal birth control) and force companies to give it away free to young girls without parental consent and woman of all ages?

— For high school boys and men to take steroid drugs, it is a crime. Whereas girls and women taking steroid drugs (i.e. hormonal birth control) are now treated as if they are taking a sacred, life preserving vitamin that women cannot live without.

This is not information that should be kept from the public. Women deserve to be told the truth. They are not being warned that birth control methods are causing breast, liver, and cervical cancer. They are not being told about the “silent killer” effect which is causing them to unknowingly abort their babies. They are instead being told that they are healthier on birth control because it decreases ovarian and uterine cancer. According to the American Cancer Society, out of 100 women with cancer, 31 have breast cancer, 6 have uterine cancer, and 3 have ovarian cancer. This is not a healthy tradeoff of risks that is worth taking.

If, indeed,” it is cheaper to prevent than to treat” then it is time for the White House, Kathleen Sebeilius, and all health agencies within the government to sound the warning trumpet to warn women on hormonal birth control about these devastating medical consequences.

So this small ‘We Are Women’ rally draws a small group of demonstrators and gets hyped as ‘thousands, nationwide’ while the ‘March for Life’ rally gets virtually igorned each January.

But media attention is irrelevant for the validation of some strong women’s initiatives growing and spreading now since the HHS mandate was announced. Like ‘Women Speak for Themselves.’ Who are being validated by new signers every day.

WSFT began with an open letter to the White House, Congress and Secretary Sebelius in February 2012, demanding respect both for religious freedom and for an understanding of woman’s freedom and equality that goes beyond “free contraception.”  It now has over 31 thousand signatories from every state.

“It defies reason that a few groups could speak for all women on issues of life, family, sex and religion,” said WSFT founder, Helen Alvare.

“The 31,000 plus women who have signed onto our open letter will no longer sit silently by while a few political figures and their allies insist that religious freedom has to bow to the theory, the ideology really, that the centerpiece of women’s freedom is sexual expression without commitment,” continued Alvare.

Catherine, a woman in her twenties living in New York City and a signatory, wrote to WSFT: “Out of respect for themselves and others, many women choose to live a life of sexual integrity…Many of my girlfriends and I have found this approach to our sexuality to be freeing, empowering, and constitutive of a deep sense of happiness.”

“I’m a pro-choice woman who respects the rights of other women to hold different views,” wrote another WSFT member Carol, from Vermont. “More specifically I expect the government, in compliance with the Constitution, to protect every person from being coerced into acting in a manner contrary to his or her conscience. The HHS mandates are a fundamental violation of our rights to free speech and religion.”

Hundreds more women wrote to WSFT to express their strong opposition to the message of the Saturday rally.

“An honest ‘We Are Women’ rally would acknowledge the diverse views held by women. It would acknowledge the science about the decline in women’s well-being associated with the world view this rally represents,” Alvare says. “No one speaks for all women on these issues. Let women speak for themselves.”