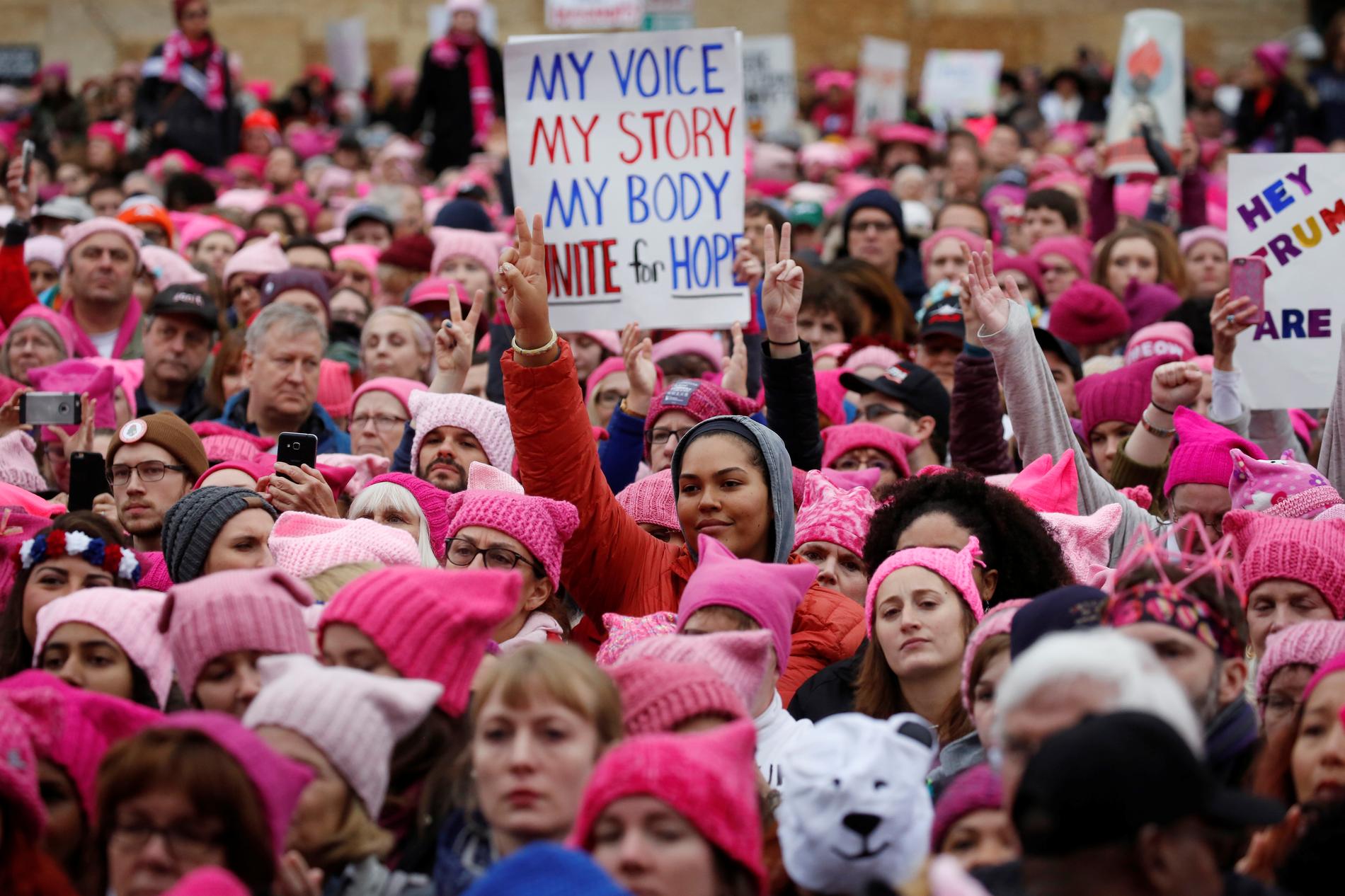 There have been many social movements in Western History, some of them noble, some of them mixed, some of them misguided, and some of them evil. But we recently witnessed something new – a movement that is just plain pathetic. Millions of women and a few men have protested Donald Trump’s election with demonstrations whose trademark was the pink pussy hat.

If a man had predicted this sort of response, he would be damned as a sexist for his failure to take women’s minds seriously, but large numbers of women seem happy to confirm the most demeaning feminine stereotypes, as well as the notorious meathead Spiro Agnew’s picture of the Left as “an effete corps of impudent snobs who characterize themselves as intellectuals”.

Islamic terrorists must be chortling as they contemplate the decadence of America’s elite.

Although the pussy hat was invented by a woman named Kat Coyle, a key sponsor of the march – billionaire and Hillary Clinton supporter George Soros – was a man. Yet many women went along. Some women even claimed that Trump had ruined their sex lives. The issue is why.

Clinton’s defeat was at the surface narrow, even technical. But, looked at more deeply, it was a humiliation. She sold herself as the women’s candidate, and made much of her opponent’s crude behavior toward women (which was no worse than that of her husband and prospective “first dude”.)

But she lost decisively (34% -62%) among white women without college degrees. So, to everybody’s great surprise, it turns out that not all women think the same way. Clinton’s icy contempt for low status white Trump supporters – “deplorables” – got its just reward. Her crowd were reduced to saying that working class women are slaves to their husbands – not the picture of women that feminists have been trying to encourage elsewhere.

And so we get expressive rather than rational politics. People who feel powerless choose to sound off rather than attempt persuasion. They even talk civil war (as in the slogan “Not My President”) without bothering to look at the demographics of the armed forces. The Confederacy, which made the most recent attempt to refuse the results of an election, had a large and well-trained army at its disposal. And they lack the intelligent leadership which would give them better guidance.

The level of political discourse in America has been steadily declining. I do not want to exaggerate. My first memory of a political slogan was “I like Ike”, supported by a ditty “Whistle while you work/ Stevenson’s a jerk/ Eisenhower’s got the power.” And there continue to be published thoughtful discussions of all the issues of the day. And endless editorials, some of them thoughtful, can be found on the Web.

For that matter, Democrats for Life, which thinks outside the contemporary box, reports that it received a receptive audience in Washington despite the attempt of the March’s organizers to exclude them. On the other hand, Feminists for Life of America held themselves aloof, insisting that “Susan B. Anthony would never have joined the Women’s March on Washington.”

But, broadly speaking, it is hard to deny the guttering of the American mind – to which Clinton’s husband contributed by his ridiculous lie about his relations with Monica Lewinsky. Emotional manipulation has driven out rational discourse in American politics.

Part of the problem is the decline of civic education in America, from the bottom to the top. The plebeians are sent to public schools at which they learn nothing except the skills of survival in a jungle; the elite are taught in such a way that, unable to answer opponents, they attack by shouting them down or they retreat into safe spaces.

In the Northeast, college students may never encounter a conservative professor — a fact that intelligent liberals and Leftists ought to deplore. For we all need to know how our beliefs and behavior look to others. Imagine Susan B. Antony or the women who ended the civil war in Liberia wearing pink pussy hats, or a man claiming that Hillary Clinton had deprived him of his manhood.

The pussy hat movement has its roots in deep cultural and social pathologies.

The Left is running on empty now that doctrinaire Marxism has fallen out of favour. No one these days contends that the history is predictable, or that the outcome of our struggles is destined to be good or even tolerable. The unpredictability of history, like the mercy of God, is now a source of hope. But a social-gospel Christianity, which Pope Francis is reviving, will not sell among contemporary progressives. It might even require them to oppose abortion and same-sex marriage. And however important the protection of our common home might be, the vision of the ecology movement is both murky and apocalyptic.

On the Right there is neoliberalism, which celebrates, even deifies, the market, and takes John Stuart Mill’s phrase “marketplace of ideas” far too seriously. Contemporary political advocates sell the sizzle, not the steak. And if pink pussy hats sizzle for some audiences, they look no further. Hence self-expression is exalted, and a responsibly formed conscience treated with contempt. The tolerance of neoliberals comes to an end when such consciences get in the way of their programs, when some part of society has an usual need for community (say for grandparents to help raise children), or when a nation with a different tradition resists American cultural imperialism.

Make no mistake. We will have to fight Trump on a number of fronts, including immigration and the environment. And on such issues Democrats and Republicans (many of whom intensely dislike Trump) can be allies. But those who pin pink pussy hats to the mast must be left to go down with the ship.

Phil Devine is Professor Emeritus of Philosophy at Providence College.