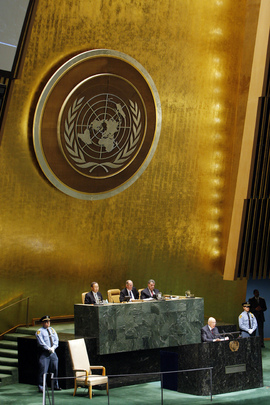 The right to life,
abolition of the death penalty, children in armed conflict, elimination of all violence
against women, the empowerment of women and women’s rights are all causes
discussed, analyzed and embraced at the United Nations. Although they never
are, all of these should apply to the earliest stages of life.

As life commences
at conception, the “right to life” – as enshrined in Article 3 of the United
Nations Declaration of Human Rights – must be nurtured until birth. The unborn
are human beings in the early stages of formation, due to achieve fullness of
viability upon birth. To voluntarily “interrupt a pregnancy” as some countries
refer to abortion, is to deliberately deliver the “death penalty” to human life
in its earliest stages. Is this not a form of “armed conflict” directed at a
child in the making?

Abortifacient
instruments are death dealing weapons employed against nascent life, against a
being that is completely unarmed to resist the invader. What situation can be
more belligerent, hostile and violent against both an unborn child and its
mother than abortion?

A woman lies
helpless, flat on her back, unconscious, in a death-dealing clinical
environment, submitting to physical “violence” in the form of a bodily invasion
to terminate the child-bearing mission that is entrusted only to a woman. As
only women can bring life into the world, she witnesses the horrific
dismemberment and termination of life of a pre-infant child in development.

Can any woman truly
consider this “choice” a “right” that makes her “powerful?”

Abortion
statistics, when they surface, can be disconcerting. In China more than 100 million
baby girls are missing, as an Economist
magazine article revealed so vividly a year ago, either aborted outright or
their existence terminated in unspeakable ways upon birth. In New York City,
the latest abortion data revealed that over 40 percent of pregnancies are
voluntarily terminated. United Nations agencies such as the Population Fund
(UNFPA), campaign ceaselessly for “safe abortion” as the primary solution to
maternal mortality while never releasing any comprehensive data on abortion globally
let alone data for maternal deaths that occur where abortion is “legally”
permitted.

A pertinent and
pregnant “life” phrase was uttered in a recent statement made at the UN by a
visiting Head of State. On March 28, 2011, the President of Italy, Giorgio
Napolitano, addressed the General Assembly. In his statement the President
remarked: “Our opposition to the death penalty stems from our long established
conviction in the right to life.” (The Italian Delegation was at the forefront
in the adoption by the UN General Assembly of a 2007 resolution calling for a
moratorium on executions in countries where the death penalty is permitted.)

The Italian
President then went on to state: “In 1700, the Italian philosopher Cesare
Beccaria asked a simple question: ‘Did anyone ever give to others the right of
taking away his life?’”

Can not the phrase
be altered today to read: “Does a woman really have ‘a right to choose’ to
authorize an abortion provider to take away the life of her unborn child?”
Indeed, the Italian experience provides food for thought as Italy has become a
“nation
that has turned away from abortion.”

If we are a cohort
of nations that endorse the right to life enshrined in the UN Declaration of
Human Rights and if we abide by the rule of law, capital punishment should be
banned fundamentally by application of the natural law – which is at the origin
of all laws.

Has the time not
come for aborting women’s empowerment through abortion?


Vincenzina Santoro is an international economist. She represents the
American Family Association of New York at the United Nations.