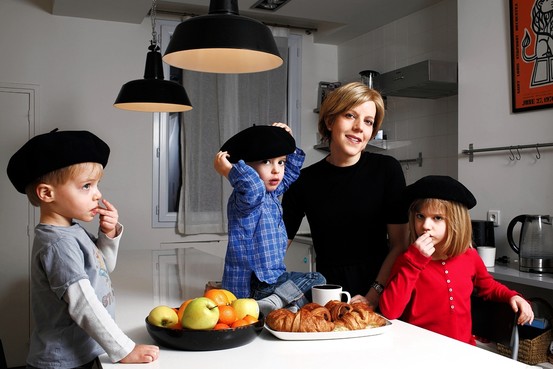 I can hardly wait to publish my new parenting book, the thesis of which will run something thus: “German-Swiss-Slovak-Canadian Catholic” parents are demonstrably superior at raising children…”  But frankly, with a mix like that, I’m stuck for a catchy nickname. Tiger Mom is already taken, and there doesn’t seem to be a national animal for Slovakia.

It does seem currently fashionable to elevate or denigrate parents based on their ancestry, ethnicity or country of residence. Pamela Druckerman, a US journalist residing in France and mother of three (pictured), has a book out this week, Bringing Up Bebe, which catalogues her observations about why French children seem so much better behaved than their American counterparts. After reading an essay adapted from her book in the Wall Street Journal, “Why French Parents are Superior”, (see also Carolyn Moynihan’s earlier post on the subject), I’ve concluded that participants in the Parent Wars continue to plumb the depths of silly.

What is an “American” style of parenting? Can anyone legitimately say there is such a thing in a society as heterogeneous as ours?

As numerous academic studies have shown, different cultures and different socioeconomic groups in our country tend to parent their children in different ways.

Not to mention the diversity of uniquely different individuals. Hoder warns against “painting with too broad a brush” and criticizes Druckerman’s overgeneralizing and simplifications about both American and French parents. But almost immediately (and ironically) Hoder cites 1960s clinical psychologist Diana Baumrind, who suggested that there are basically only three types of parents: permissive, authoritarian, and authoritative. Really? Only three? For the whole world? Note to self: put away broad brush.

A NYTimes review of Bebe by Susannah Meadows was slightly more caustic. Meadows accuses Druckerman of the very journalistic but nearly unforgivable sin of basing her book on mostly anecdotal evidence, if not being fawningly culture-struck by living in France:

But it’s as if being a parent in another culture had made everything the mamans say sound revelatory to Ms. Druckerman. It’s the linguistic equivalent of wearing beer goggles.

Ms. Druckerman is oddly unjournalistic here. “Bringing Up Bébé” is essentially a series of generalizations based on her American and French friends and her own experiences as a mother.

When Ms. Druckerman has trouble being firm with her children, parents in all 50 states are indicted. When a French friend has more success than she has keeping her baby from pulling books off the shelf, this supposedly reveals an “enormous cultural gap.”

Of course this begs the question: are there no spoiled bratty children in France? I’ll wager that there are. And I know there are many wonderfully behaved American children, with upstanding parents to match. It is not a nationalistic, ethnic, or (dare I suggest) even a particularly religious thing. While I believe that having a religious faith may make the job easier (mainly by giving you a meaningful contextual framework, if not a long-term goal that transcends time itself), I can offer no argument that loving, reasonable, non-believing parents are incapable raising well-behaved and decent human beings.

I think it basically comes down to whether or not you’re sensible, loving, and “have a way” with kids. Some of it’s natural, to be sure—and I say this as a former feminist who didn’t believe there was any such thing as a “mothering instinct”. I was rather surprised to be overwhelmed by it when I had the first of my seven babies. Other parenting skills and strategies can be learned and consciously practiced. One’s origins, ethnicity, and other factors may help or hinder this process, but how we interact with our kids comes down to daily choices made by individuals.

What makes a sensible, well-balanced parent?  A lot has to do with treating children as persons with inherent dignity, and not a toy or collector’s item. It also helps a bit if you take the long view: you want to raise them to be productive and purpose-filled people who will make the world a better place, and not just get them off your back for the next half hour. As to the specifics of just how this may be accomplished, perhaps your best bet is to find “successful” parents around you and ask them how they did it.

Ms Druckerman herself seems to have discovered some important aspects of character formation in France — especially how to cultivate the ability to delay gratification (see her essay in WSJ) — and these are worth highlighting. But somehow I feel that her book, just the latest in a very long line of parenting tomes, is not likely to offer the insight that the others before it are apparently lacking. C’est la vie.