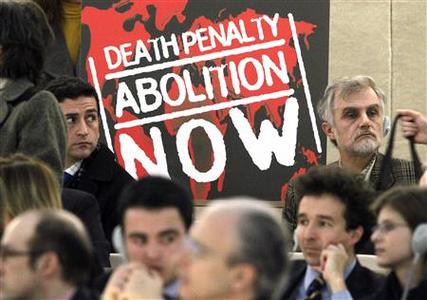 The United Nations High Commissioner for Human Rights called a meeting in early July to commemorate the fifth anniversary of the General Assembly’s vote in favor of a moratorium on the death penalty. The Secretary-General, Ban Ki-moon, delivered some remarks in which he reminded listeners that more than 150 countries have either abolished capital punishment or restricted its application. Some 32 states retain the death penalty in case of drug-related crimes and last year only 20 countries actually conducted executions. In the United States, 17 states have done away with the death penalty.

The Secretary-General’s concern for saving lives of criminals, some of whom could be innocent, included some very poignant words. In his statement he said:

“The right to life is the most fundamental of all human rights. It lies at the heart of international human rights law. The taking of life is too absolute, too irreversible, for one human being to inflict it on another, even when backed by the legal process.

“Where the death penalty persists, conditions for those awaiting execution are often horrifying, leading to aggravated suffering. Information concerning the application of the death penalty, including secret trials and executions, is often cloaked in secrecy. And it is beyond dispute that innocent people are still put to death.”

The Secretary-General provided some food for thought in referencing the right to life. If he is so concerned about the “right to life” in cases of near execution, should he not be at least equally concerned about the “right to life” for the unborn – who are certainly innocent? If an unborn child is “an unwanted pregnancy” – which UN agencies such as the Population Fund (UNFPA) are eager to have the entire world avoid – why should that innocent child be given a death sentence?

There are actually two opposing global trends when it comes to deliberately terminating lives. While only a few countries permit the death penalty for criminals, even fewer ban abortion, which is a death penalty for the innocent.

According to a UN Population Division compilation (2009), only six out of 195 countries totally ban abortion. That is, 189 countries allow the death penalty on totally innocent human lives – for reasons ranging from saving the life of the mother to abortion on demand – while 150 countries do not apply it to convicted criminals.

There is a further contradiction: at the UN, while the right to life is quoted selectively, the rights-based approach that is applied to almost anything the UN population controllers target leads to widespread use of the term “reproductive rights” with many officials and delegates angling for an opportunity to declare abortion as a human right. Vigilant pro-lifers among civil society and the few life-affirming delegates of abortion-free countries maintain constant vigilance at virtually every UN event.

The UN High Commissioner for Human Rights, Ms Navi Pillay, of South Africa, also spoke at the same event. She had this to say:

“There is no right more sacred than the right to life. Since the beginning of my mandate, I have engaged in a dialogue with many States on this issue. During my recent country missions, I had encouraging discussions with senior officials about abolishing the death penalty or imposing at least a moratorium on it. In addition, my Office works at the national level to stimulate the debate, including through seminars which provide a forum for a core group of scholars and practitioners that come forward with convincing arguments in favor of the abolition of the death penalty.”

Ms Pillay should be taken at her word about the sacredness of the right to life. Despite her eloquent statement above, she too is among the advocates of reproductive rights. However, perhaps one or more of the scholars and practitioners she intends to consult will make the case for the right to life at the beginning as well as at the end of human existence.

What more “convincing argument” can there be than to abolish the death penalty for the truly innocent?