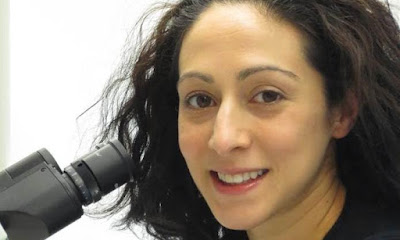 A scientist made her case last week to be the first in the UK to be allowed to genetically modify human embryos.

The regulator, the Human Fertilisation and Embryology Authority (HFEA), considered her application last Thursday and will give a ruling later this month (Nature, Guardian, Mail, Telegraph). If approved the research could begin as early as March this year.

Dr Kathy Niakan (pictured), from the Francis Crick Institute in London, wants to use a new technique called CRISPR/Cas9 to “edit” genes in day-old human embryos left over from IVF in order to discover what role they play in normal embryo development.

She plans to start with a gene called Oct 4, which is thought to have a critical role in embryo development, using 20-30 donated embryos. If this is successful she plans to move on to testing 3-4 other genes, each again using a further 20-30 embryos.

The research is highly controversial, and not just because it results in the destruction of the embryos being studied (each will be destroyed and examined at seven days).

Although gene editing to treat some genetic disease in fully developed human beings appears to have huge promise (such as in the case of Layla Richards who was saved from terminal leukaemia in London last year), gene editing in embryos (germline gene editing) has come in for huge criticism internationally (see also here) and has so far only been attempted (unsuccessfully) in China.

This international criticism is mainly driven by concerns about safety and unforeseen consequences – introducing genetic changes into a day old embryo will mean that any genetic change will be expressed in every cell of the developing human being, including reproductive cells (sperm and egg), and will therefore be passed on down the generations.

CRISPR, however, can be applied with great precision and there is the very real possibility that it might be used in the future to treat – or perhaps even prevent – some genetic diseases by correcting genetic defects in embryos or foetuses. However it is still very early days.

Usually research like this needs to be conducted exhaustively using animals before it is attempted in humans. However Niakan argues that the genes she wishes to study are sufficiently different from their equivalents in animals to justify doing the research on human embryos.

Whenever scientists seek approval for controversial techniques, they tend to emphasise their potential therapeutic benefit in order to get regulators, parliamentarians and the general public on side.  This case is no exception.

Niakan is arguing that her research will provide a deeper understanding of the earliest moments of human life and could reduce miscarriages: ‘The reason why it is so important is because miscarriages and infertility are extremely common, but they’re not very well understood. We believe that this research could really lead to improvements in infertility treatment and ultimately provide us with a deeper understanding of the earliest stages of human life.’

The media has picked up strongly on this theme with The Times (£) running the headline ‘GM embryos set to give massive boost to IVF success rates’:  ‘Britain’s first genetically engineered human embryos could lead to dramatic improvements in IVF and help to explain why so many women suffer miscarriages, according to the scientist leading the project.’

There are strong advocates for the research in Britain (see here and here) and an international collaboration (the Hinxton group) has made an earlier call for bans on germline gene editing to be lifted (see critique here).

Other voices have been raised in support. Hugh Whittall (£), the director of the Nuffield Council on Bioethics, said that there are ‘possible future scenarios in which a modification made in a research context — for example, to correct a disease-causing genetic mutation — could, if this were to become permissible, result in the birth of a child.’
Sarah Norcross, Director of the Progress Educational Trust, has also jumped on the bandwagonsaying: ‘This is an important piece of basic scientific research. Recurrent miscarriage affects a huge number of people and it isn’t greatly understood. People are just told to go away and try again. To improve our understanding of something like that, which has a huge impact on people, is really valuable.’

Professor Robin Lovell-Badge of the Crick Institute was a little more guarded, ‘If you found that there were people carrying a specific mutation which meant that their embryos would never implant [in the womb], then you could contemplate using the genome-editing technique to make germ-line changes which would then allow the offspring of that woman to be able to reproduce without having a problem.’

The clear implication is that some genetic defects which lead to embryo death or miscarriage are those that could be ‘corrected’ by CRISPR (ie single gene defects).

But is there any real evidence that embryo death or miscarriage is actually caused these sorts of genetic problems? Actually no.

If CRISPR could be made to work safely in embryos then it might conceivably have a role in correcting genes responsible for single gene disorders like cystic fibrosis, sickle cell disease, Fragile X syndrome, muscular dystrophy or Huntington disease. But again, is there any evidence that single gene disorders are responsible for failure of embryo implantation or miscarriage?

Very little, if any. It is mere speculation.

According to the American College of Obstetricians and Gynaecologists (ACOG), most miscarriages (about 60%) occur when an embryo receives an abnormal number of chromosomes during fertilisation (see also here). This is called aneuploidy. This type of genetic condition occurs by chance – there is no medical condition that causes it. However it becomes more common in women of increased reproductive age.

Down’s syndrome, Edward’s syndrome and Patau’s syndrome are the best known forms of aneuploidy. In each condition there is an additional chromosome – numbers 21, 18 and 13 respectively. Babies with these conditions are usually born alive but most other aneuploidies are lethal in utero – causing miscarriages or failed implantation.

According to the ACOG, in a small number of couples who have repeated miscarriages, one partner has a translocation, involving the abnormal transfer of one part of a chromosome to another  chromosome. Deletions and inversions may also play a role.

All of these chromosomal abnormalities (aneuploidy, translocations, deletions and inversions) may be present in sperm and/or eggs or may occur after fertilisation. Either way they end up in the embryo and fetus.

So what about failure of an early embryo to implant in the uterus? Implantation failure is related to either maternal factors or embryonic causes. Maternal factors include uterine anatomic abnormalities, thrombophilia, non-receptive endometrium and immunological factors. Failure of implantation due to embryonic causes is associated with either genetic abnormalities or other factors intrinsic to the embryo that impair its ability to develop in utero, to hatch and to implant.

The average implantation rate in IVF is about 25 %. Inadequate uterine receptivity is responsiblefor approximately two-thirds of implantation failures, whereas the embryo itself is responsible for only one-third of these failures. Again, aneuploidy and translocations are major reasons for embryo-related failure.

This simple fact has not been made clear to the media, to decision makers or the public. In fact researchers like Niakin and Lovell-Badge, who must be aware of it, seem to have gone out of their way to fuel the misconception that gene editing will help infertility.

This, it seems, is both negligent and disingenuous, as the key factor that is driving the call to approve this new research is the supposed benefit to infertile couples.

In reality, it seems to be more about satisfying scientific curiosity regarding how genes work in the normal development of the human embryo, with any therapeutic application a distant dream.

British scientists have form in making wild and rash promises about new therapies in order to get approval for controversial research – the hype around animal-human hybrids and three parent embryos (mtDNA) are cases in point.

“The decision is very disappointing, but comes as no surprise, since the HFEA can never say no to scientists.  These experiments are scientifically useless and morally very problematic. The research lobby has distorted the scientific facts in order to defuse criticism.”

Gene editing, as I said at the beginning of this article, has great therapeutic promise for treating and perhaps even preventing some genetic disease. But gene editing of the embryo (germline editing) is extremely controversial and potentially very dangerous. Scientists around the world think that we are mad in Britain to be pursuing it.

At very least much more work is needed in animal models before we contemplate using it on human embryos; and especially we need to establish first in animals whether or not it is likely to have any benefit at all in preventing infertility before we start making rash promises about humans.

I am not alone in remaining sceptical and unconvinced.

Here’s hoping that the HFEA will pour cold water on Niakan’s proposed research. However, based on past form I am not holding my breath.

Peter Saunders is Chief Executive of the Christian Medical Fellowship in the UK and was formerly a general surgeon. He also serves on the boards of the International Christian Medical and Dental Association and Coalition for Marriage and is campaign director for the Care Not Killing Alliance. This article has been republished with permission from the CMF blog.