When I think of a movie that changed the world, Man of Marble by Andrei Wajda comes to mind. I was about 15 when I saw it in the youth community theater of my small French town. This 1977 Polish film tells the story of a young female film maker who investigates the life of Birkut, a super-productive bricklayer of the 1950’s. Once a hero hailed by the local government, Birkut mysteriously disappears along with any public records of his life, and the young woman is left facing a wall of resistance from the administration in her research efforts.

Wajda’s movie was a sharp and effective critique of corruption and propaganda in Communist Poland. It ended up been censored by the Polish authorities and its director jailed briefly. The film indirectly chronicles the underground worker’s union movement Solidarity, the same movement that led to the peaceful fall of the dictatorial regime in 1989. It is considered a prophetic movie that galvanized the movement and help free Poland from oppression.

I wonder if something similar is about to happen in the domain of women’s health. Its underground movement is made up of thousands of women from different race, religious and political backgrounds who are joining a quiet and peaceful revolution called the fertility awareness movement. One by one, more women are rejecting the use of hormonal birth control in favor of learning to chart their cycles and ridding their bodies of hormones and foreign devices. The women’s healthcare‘s establishment and the pharma industry are fighting back by discounting the actual effectiveness of fertility awareness based methods and by actively promoting contraceptives, even IUDS, to teens.

And now we’re about to see the fertility awareness story in film. Rickie Lake and Abby Epstein, the producers of the 2008 documentary The Business of Being Born, are producing a new documentary based on Holly Grigg-Spall’s book, Sweetening the Pill. The book itself was, excuse my French, “un pavé dans la mare” (literally: a stone in the pond, shaking things up), and its author said in a recent interview that she “soon realized it was really taboo almost to criticize the Pill or the culture around the Pill.”  While she was writing the book, Grigg-Spall saw the earlier film and recognized the parallel between the childbirth industry and that of birth control.

Ricki Lake saw it too. In the same interview she explains: “What we did for birth, we want to do for birth control, and empower women with more information and more choice. The Business of Being Born was about body literacy and this project is the same―it’s about women knowing, understanding, and trusting their bodies.”

Another important common thread is how women connect with these stories. In the past six years, Lake and Epstein’s critique of the birth industry has developed into an international grassroots campaign. Grigg-Spall saw the same thing happening with her writing: “The book began as a blog that I wrote about coming off the Pill and my experience doing that, how it made me feel, finding alternative contraception, learning about my cycle and so on. That blog meant that lots of women got in touch to share their own stories. I realized the extent of this problem.”

Abby Epstein, the director, also explains that trying to get funding is not as easy as if they were doing a film like Food Inc.: “We have to explain that it is not anti-birth control or anti-Pill. Instead it is pro-informed consent, pro-choice, and pro-knowledge.” For this reason, they launched a Kickstarter campaign to get funding for the film, and we encourage our readers to consider supporting it as well.

This film is not the only production about the topic. A few weeks ago, I wrote about Miscontraceptions, a fresh, personal, engaging and fun short film, which is quite convincing and speaks the language of young adults especially. If you haven’t seen it, watch it and write a note to the young (and brilliant) director, Cassie Moriarty.

Over two years ago, I also started working on a documentary. At first, we did some interviews for a short film. Then we realized, before Ricky and Abby announced their intentions, that a longer feature was needed to tell the story. And so, we did it. After the many adventures and challenges that an amateur movie maker with a ridiculous budget can face, I am proud to announce that we have finished the first Natural Womanhood documentary.

It is called Natural Love Stories. It is about three couples who, after experiencing various problems with hormonal birth control, each switch to a natural fertility awareness based method. Several medical professional contribute additional expertise about the dangers of contraceptives and the benefits of natural methods. We’re premiering it in San Antonio on July 21 and then will have it available on our website soon after that. More information on that topic soon. 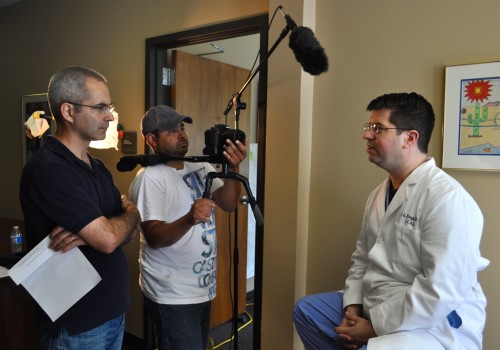 So, all of you NFP and FAM afficionados: rejoice! I don’t believe any one movie can be all things to all people; many voices are needed to help change the world. Our film will have its place and will help many young couples.

I also trust that Ricky and Abby’s documentary will be far reaching. Here is what was written about their previous work: “In the three years since it first opened (quite briefly) in a handful of theaters, The Business of Being Born has become a grassroots phenomenon, a kind of one-DVD post-feminist revolution.” They’re about to lay the next stone of that peaceful revolution. And I’m all for helping them with it.

Gerard Migeon is the founder and editor of Natural Womanhood, a MercatorNet partner site.