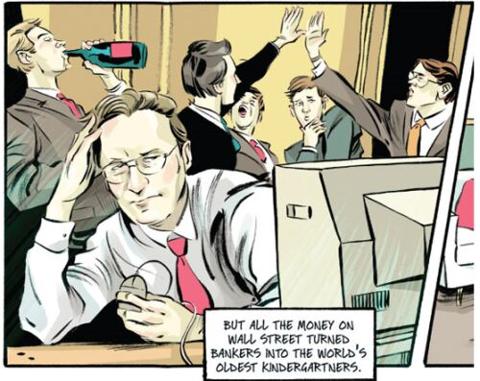 We are asked by some to believe that it can. “Neuroeconomics” is one of many new directions in neuroscience – scanning the brains of floor traders, for example. In ” Testosterone and high finance do not mix: so bring on the women ” in a recent issue of The Guardian, Tim Adams tells us that the new science of neuroeconomics is proving beyond doubt that “hormonally-driven young men” should not be left alone in charge of our finances. Research shows that too much testosterone impaired the risk assessment abilities of traders, and so does too much cortisol. The solution, he thinks — riffing off Michael Lewis’s The Big Short — is to get more women involved: Womenomics.

According to Adams, a new science of decision-making – neuroeconomics –

proposes the idea that you will create a better understanding of how people make economic choices if you bring to bear advances in neurobiology and brain chemistry and behavioural psychology alongside traditional economic maths models. Not surprisingly, neuroeconomics has plenty to say about the question of whether decision-making, in high-pressure situations, divides on gender lines.

Reading the final report of the Financial Crisis Inquiry Commission of the US Treasury, Adams was struck by

… the overwhelming maleness of the world described. The words “she”, “woman” or “her” do not appear once in its 662 pages. It is a book, like most historical tragedies, written about the follies and hubris of men.

His hire-more-women proposal will please some and scare others. How to think about it in a responsible way? There is a difference between a truly conservative temperament and right-wing ideology (which isn’t usually very conservative at all). A true conservative agrees with the Catholic Church that human nature is not easily overridden.

So the question is not whether women would have been more cautious with other people’s money. Let us grant that. No one needed neuroscience tools to discover that women tend to be more cautious than men about things in general. The question is, would pushing women onto the trading floor and creating incentives to hold them there have the same effect as the women would have if, left to themselves, they naturally gravitated there? A liberal tends to say yes, and a conservative tends to say no. At issue is the importance each ascribes to human nature. The liberal thinks human nature can easily be altered, using the right artificial incentives.

Let’s see what this would mean for getting more women to be floor traders. If the late Leona “only little people pay taxes,” Helmsley and a horde of grasping landladies are anything to go by, some women do have what it takes to take what you’ve got.

But caution is advised: News stories about “women making it in the world of high-risk finance” almost always ring false. For one thing, the women who are well adapted to that environment don’t stand out enough to merit a story. So the story that gets published is usually about changing the environment to suit women. In the context, that means changing human nature, unfortunately.

Adams makes that part quite clear:

Joe Herbert told me at his lab in Cambridge: “What is clear is that there are neurological differences between the sexes. Women, in very general terms, are less competitive, and less concerned with the status of being successful. If you want to make women more present, you have to remember two things: the world they are coming into is a man-made world. The financial world. So, either they become surrogate men… or you change the world.”

Alternatively, some women do have the temperament, but precisely for that reason, they will neither become surrogate men nor change the world. They will just fit in.

So now we come to the key question: Is the floor trade world a natural outcome of human behaviour, into which some men and a much smaller proportion of women fit? Yes, probably. My financial advisor tells me that the market is run by two principle human motives: Greed and fear. Bubbles and their subsequent collapses happen when greed overrides fear. Later, fear restores order and the market starts to recover. Which is to say that crazy markets and their corrections are caused by human nature. It’s hard to change the fundamental reality that a stock market is about people making decisions, wise or foolish. An Italian proverb puts it like this: Three women and a goose make a market. All the rest follows.

In the recent American mortgage bank collapses, the essential problem was that the properties were not worth the prices they were traded at. Perhaps women could suss that out more easily than men. Adams thinks so:

… the best way of preventing boom and bust was to have more women and more older men – less in thrall to hormones – in the markets. “We know that opinion diversity is crucial to stable markets. What no one talks about is endocrine diversity, a diversity of hormones. The billion-dollar question is how to achieve it.”

It can’t be achieved. The people who could suss out imminent collapses are not usually traders, and if we forced them to become traders, they would likely become unhappy and dysfunctional.

Dreamers dream on. At the Wall Street Journal, Jonathan Clement advises that the “reptilian brain” is to blame for our bad investment decisions. He means the basal ganglia of the vertebrate brain. Allegedly, reptiles (who manage with basal ganglia only) are bad investors. But in truth most of us did not know they were investors at all.

Atheist neuroscientist Raymond Tallis has been rallying the genuine skeptics at New Humanist against this neurotrash, as he calls it. The only harm it can really do in the long run is to put off the day that we discover that we are our own worst enemies. And that our hormones and our brains are not to blame for that situation. We are.