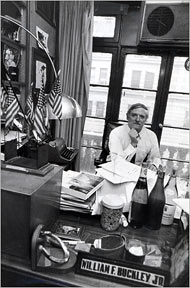 It may be difficult for anyone coming of age in the post-Reagan era to fully appreciate the monochromatic character of American political culture during the first three and half decades after World War II.

Liberalism was the default position of most politicians, pundits, journalists, all academics, and most voters whose formative memories were the Great Depression and the New Deal. Even Republican presidents toed the line. It was Richard Nixon who claimed, “We are all Keynesians now.” In 1950 the great liberal intellectual and critic, Lionel Trilling, viewed the fact that there were no conservative or reactionary ideas in general circulation as self-evident.

The election of Ronald Reagan as US president in 1980 is unimaginable but for the Herculean efforts of one man, William F. Buckley Jr, who passed away this week.

Buckley’s personal achievement in catalysing an ambitious intellectual and political movement, which embodied elements of economic and social conservatism as well as anti-Communism and robust support for military preparedness, is testimony to his mental acuity and personal stamina.

According to George H. Nash, author of the definitive history of the post-War conservative movement, Buckley published 55 books (fiction and non-fiction); dozens of book reviews; at least 56 introductions; prefaces, and forewords to many books; 225 obituary essays; more than 800 editorials, articles and remarks in his magazine, the National Review; and approximately 5,600 newspaper columns. He delivered countless lectures (Buckley estimated about 70 a year over 40 years) and hosted 1,429 separate Firing Line shows, and, according to Nash, “may have composed more letters than any American who ever lived.”

Buckley’s televised performances, in which he engaged friend and foe alike with élan and civility, are like a fine wine when compared to the swill which is contemporary cable television and, yes, conservative talk radio.

To use a reference from America’s Revolutionary era, Buckley was a one-man Committee of Correspondence.

Many commentators have observed that there would be no Ronald Reagan without Barry Goldwater; no Goldwater without National Review; and no National Review without William F. Buckley Jr.

Buckley founded the National Review in 1955 which he supported through his lecture fees and intense intellectual energy until he gave up his voting stock in 2004. He made it the premier publication of American conservatism even after other publications such as Irving Kristol’s the Public Interest, the American Spectator and the Weekly Standard came into being years later.

In Buckley’s hands the National Review was the forge which fused the distinct, sometimes quarrelling, strands of conservatism into a coherent intellectual whole. Economic libertarians, cultural traditionalists, and anti-Communists were strangers to one another until Buckley and other conservative intellectuals such as Frank Meyer were able to reconcile freedom and virtue, limited government with social cohesion, liberty and order.

Thus, the post-war conservative movement began to articulate more clearly the indispensable role that religion, morality, family, and social order play in sustaining and protecting a free market system as found in America. In other words, “economic life naturally does not go on in a moral vacuum”.

This at least was the view of one of the greatest free market economists well known to American conservatives in the Buckley era. Wilhelm Röpke, often referred to as the architect of the post-war economic boom in West Germany, authored A Humane Economy which appeared in the US in 1960. This was a timely contribution to what was to become known as “fusionism” in conservative circles.

Röpke described the essential fusion of a free market and the social context necessary for its survival:

Self-discipline, a sense of justice, honesty, fairness, chivalry, moderation, public spirit, respect for human dignity, firm ethical norms—all of these are things which people must possess before they go to the market and compete with each other. These are the indispensable supports which preserve both markets and competition from degeneration. Family, church, genuine communities, and tradition are their sources.

William F. Buckley Jr, was a Roman Catholic. Always the wit, I once heard him describe himself as “not a good Catholic, but a loyal one.” No doubt, his faith provided the moral and intellectual imperative to achieve a synthesis of freedom and responsibility and the vision of a society free of the heavy hand of government but mindful of morality and good order.

Other commentators have described Buckley’s numerous achievements, but his untiring defence of the integrity of unborn children in the face of the devastating Supreme Court decisions in Roe v. Wade and Doe v. Bolton is the logical, most profound extension of his fusionist principles. His untiring defence of the right to life will surely weigh heavily in his favour in the higher realm for which he recently departed.

As a young law student, I vividly recall the marvellous article by the federal judge and philosopher John Noonan which Buckley ran as a cover story in National Review in the early 1970s. It was a magisterial piece revealing the flawed legal reasoning of the Supreme Court and its misreading of history and science, all done with impeccable logic and scholarship, not to be found on the pages of any other mainstream opinion magazines. Reprints of it were made available for a song and enjoyed wide circulation throughout the country.

Subsequent to firing this salvo, Buckley supported the publication of the Human Life Review, right from the offices of National Review. It soon became the forum and rallying point for the small band of thinking, committed people who took to heart the admonitions of the Declaration of Independence and made the American right-to-life movement the force it is today in American politics. There is nothing like it in the developed world.

G. Tracy Mehan III is an environmental consultant in Arlington, Virginia. He is an adjunct professor at the George Mason University School of Law.

G. Tracy Mehan, III, was Assistant Administrator for Water at the U.S. Environmental Protection Agency in the Administration of President George W. Bush. He is an adjunct professor at Scalia Law School,... More by G. Tracy Mehan III