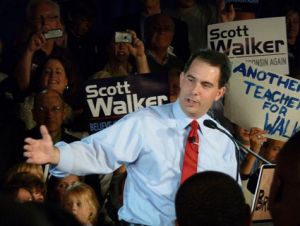 At the end of the day, after all the battling, he is left standing. Unimaginable just a couple/few months ago during those daunting days and nights of relentless protests when angry demonstrators besieged the capitol and camped out, hostility growing by the hour.

Democrats in the legislature fled over the border to Illinois to escape procedural governing under that governor. It was all surreal, and the political fate of Scott Walker seemed secondary to his personal plight as crowds appeared ready to practically lynch the man.

This is mere months later, in a heatedly divisive presidential election year. The day proud and passionate Wisconsin citizens waited and worked for, long and hard. And Scott Walker stands victorious, at the end of the day of the recall vote based not on criminal activity, but the governor’s governance.

Walker won because he represented the taxpayer

What? How did he do that?

In early March of 2011, Forbes columnist Rick Ungar called Wisconsin governor Scott Walker’s plan to scale back public-sector collective-bargaining power “one of the great political miscalculations of our time.” Saying Walker had “lost the war,” Ungar correctly pointed out that Walker’s approval rating had plummeted, with 60 percent of Wisconsinites saying they disapproved of his job performance.

The state had descended into a Hobbesian state of nature; the protests delivered assaults, disruptions, profanity, and public rancor. Talk of a recall began to dog Walker. Starting early in 2011, the “solidarity singers” camped in the state-capitol rotunda singing songs such as “Scotty, We’re Coming for You.”

With Walker’s win tonight, it is worth going back to figure out how the governor pulled his political career out of the abyss over the past 15 months.

Yeah, no kidding. On my radio show Tuesday I asked Hotair.com’s Ed Morrissey how in the world the governor who was so reviled by unions and protest mobs not that long ago was now polling ahead of his opponent on recall election day. Results had something to do with it.

Walker was tireless in pointing out the gains the state made under his new framework. He took the unprecedented measure of releasing state jobs numbers early to show that Wisconsin was gaining jobs, not losing them as earlier federal reports had estimated.

Under Walker, property taxes fell, schools were able to avoid laying off massive numbers of teachers, the $3.6 billion budget deficit was eliminated without raising taxes, and the state even saw a $154 million budget surplus for the current budget cycle.

Walker’s press operation was energetic in disseminating press clippings that showed school districts were saving millions of dollars by not having to use the teachers’ union’s own health-insurance company. Walker calmly made the case that scaling back collective bargaining allowed government to work smarter with the money it had; for instance, school districts could now make hiring and firing decisions based on teacher merit, not simply tenure.

Pundits can have their go at spinning the importance of this day on the presidential election five whole, long months from now. But I’m left with several impressions, watching the coverage on news media that stayed with it (and some ditched out when the results were undeniable).

One is that big media suddenly decided that we have ‘voter fatigue’, and that’s true though not sudden. And it’s not the story of the moment.

Another is that Walker’s opponent Tom Barrett acknowledged the outcome even while some media were calling the race ‘too close to call.’ And he did so in a gracious concession speech after a gentleman’s conversation with Walker by phone. He called on Wisconsites to put partisan divides behind them and come together for the good of the state.

And when Gov. Scott Walker finally emerged to greet and thank his supporters, he started by thanking God. Then he gave thanks to his family. Then he showed abundant gratitude to the citizens of the state, who gave him and the process a chance.

It was a new day for results over rhetoric, and courage over calculation. But it’s still a long way to the November elections. There are important lessons here in how to navigate that road.