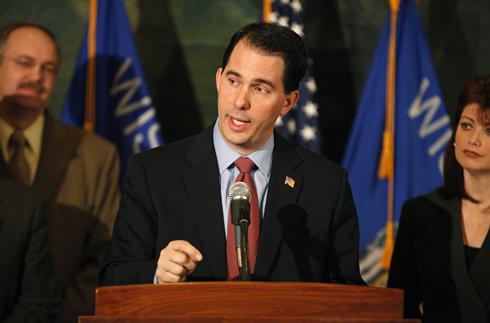 Where do we stand after all these days and weeks of fever pitch intensity over unions’ rights and state budget battles and a legislature decimated by a party of representatives who fled the state to avoid the consequences? And, what are the consequences of that?

So I’ve been on this ‘listening tour’ of both sides in this now historic confrontation. One thing I insist on in radio work and comments sections and speaking engagemsnts….we will not refer to the parties as ‘good guys’ and ‘bad guys’. There are good people on both sides of this debate. In fact, Catholics have seized on bishops’ statements, mostly partial snips of statements, to redeem their cause. But taken in full it’s more complex than that, and frankly good Catholics can and do disagree on the union benefits and negotiation debate.

Back to the question…where do things stand now?

While it’s difficult to take sides against passionate people with a stake on each, especially as nuanced as some of it is, the clear call is to admonish elected representatives who flee the state in the face of conflict. I mean….c’mon. If you think you’re going to lose the vote, the answer is to run away? I’ve said it before…this is so childish. No matter what, we want honorable representation in our state and federal government.

So what about those runaway Democrats?

In Wisconsin, GOP senators unanimously passed a resolution finding their 14 Democratic colleagues in contempt. They ordered the Democrats to return to the Senate in Madison by 4 p.m.—and threatened them with arrest if they failed to comply. Indiana House Republicans moved to start fining missing Democrats $250 a day, beginning Monday.

And the intellectual honesty I ask and expect of everyone wonders what would be the response if a contingent of Republicans fled a state to hide out somewhere across the borders because a hot political issue was set to go against their will.

So what happens when they stay away and don’t come back, and the state has to move forward?

The 1,500 potential layoffs won’t happen for 30 days, and the Republicans said they won’t happen at all if Senate Democrats come back to Madison and vote on the Budget Repair Bill.

“If the bill would go through quickly I think Governor Walker would back off,” Republican State Senator Glenn Grothman of West Bend said.

But Senate Democrats said they won’t come back until a compromise is reached, and unions can keep their collective bargaining rights.  Both sides admit they’re talking, but neither will budge on union rights.

As I’ve said before, it’s like peeling back layers of an onion, and there are right and there are rights, and those involved with human dignity must be upheld while those that by necessity must take into consideration the state’s economic realities must be honored as well, according to the Catholic Social Teaching so quickly embraced by some.

Above all, let’s be charitable, honorable, and let’s be fair.

The Wisconsin Catholic Conference (WCC) has chosen a neutral stance because the present dilemma comes down to either a choice for the common good, of sacrifice on the part of all, at times that pose immense economic threats, both present and future on the one hand, and on the other hand, a choice for the rights of workers to a just compensation for services rendered, and to the upholding of contracts legally made. As Catholics, we see both of these horns of the dilemma as good, and yet the current situation calls many of us to choose between these two goods.

So Bishop Morlino, addressing in particular his own diocese, said this:

Please pray carefully about the decision of your own conscience on this matter. It is an excellent exercise for a responsible conscience. And please pray for peaceful demonstrations in our Capitol City. Please refer to Archbishop Listecki’s letter as well, which articulates the two horns of the dilemma, with supportive texts from official Church teaching.

To the documents quoted by Archbishop Listecki I would also offer a quotation from the encyclical of Pope John Paul II, Laborem Exercens, which gives us even more “food for thought” on this matter:

“Just efforts to secure the rights of workers who are united by the same profession should always take into account the limitations imposed by the general economic situation of the country. Union demands cannot be turned into a kind of group or class ‘egoism,’ although they can and should also aim at correcting — with a view to the common good of the whole of society — everything defective in the system of ownership of the means of production or in the way these are managed. Social and socioeconomic life is certainly like a system of ‘connected vessels,’ and every social activity directed towards safeguarding the rights of particular groups should adapt itself to this system.

“In this sense, union activity undoubtedly enters the field of politics, understood as prudent concern for the common good. However, the role of unions is not to ‘play politics’ in the sense that the expression is commonly understood today. Unions do not have the character of political parties struggling for power; they should not be subjected to the decision of political parties or have too close links with them. In fact, in such a situation they easily lose contact with their specific role, which is to secure the just rights of workers within the framework of the common good of the whole of society; instead they become an instrument used for other purposes.”

Thank you very much for reading this, God bless you.