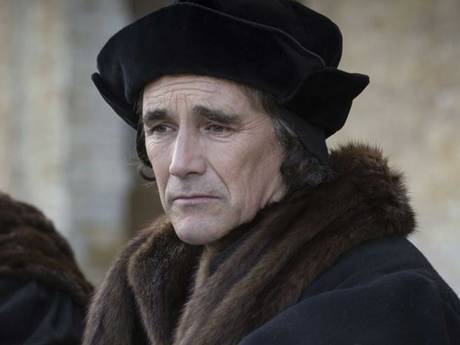 As Downton Abbey and Sherlock have raised the ratings of Masterpiece television, PBS has just launched a new sensation on Sunday nights: Wolf Hall. The newsix-part miniseries on Tudor politics and the Protestant Reformation is based on Hilary Mantel’s bestselling Wolf Hall: A Novel and its sequel Bring Up the Bodies.

Mark Rylance, star of the Masterpiece adaptation, exclaims: “I love it when an author, such as Hilary Mantel, does her research  and discovers an original understanding of a very familiar piece of history.” Rylance’s comment deserves attention, if only for its irony. The “original understanding” of history in Mantel’s novel results from her use of dated and slanted research.

In Wolf Hall, Mantel aspires to rewrite Tudor history according to contemporary prejudices.  In the process, she elevates Thomas Cromwell (1485-1540), the novel’s hero, as the true statesman of the day, while his famous and celebrated counterpart, Thomas More (1478-1535), assumes the role of villain. Cromwell is depicted as a cautious, prudent, and tolerant counselor to King Henry VIII, whereas More emerges as a grim, misogynistic, religious bigot.  If More’s trial and death typically illustrate his courage in refusing to compromise his own conscience, Mantel’s revision depicts More as a clever and even devious lawyer, who is simply and rightly caught in his own words. What once represented an object lesson in how the political order should remain open to the transcendent one becomes a tale of political intrigue that reveals Cromwell’s “statesmanlike” arrangement of More’s execution as unavoidable, even necessary.  As pragmatic, proto-modern “realism” emerges as Mantel’s theme, More’s conscience is dismissed as unreasonable zealotry, a threat to England’s common good.

The Masterpiece series, which premiered on PBS on April 5, will shock those acquainted with Robert Bolt’s A Man For All Seasons (1960) or the Roman Catholic tradition, which not only reveres More as a saint but also, since 2000, proclaims him as patron of all government leaders. The countless churches named in More’s honor, those who admired the 1966 film version of Bolt’s play, and the testimony of Amici Thomae Mori societies stretched across the globe challenge Mantel’s depiction of this humanist scholar, lawyer, philosopher, and statesman, who has been lauded for centuries because of his integrity.

And the adversaries of Wolf Hall are right to question its characterization of More. In Mantel’s own words, she explains how she came to write Wolf Hall. “I can’t do plots,” she confesses, “so I will let history do them for me.” Her “history,” however, comes from “the Tudor scholar G.R. Elton” (1921-1994). The late Cambridge historian, Mantel believes, “had established Cromwell as a statesman of the first rank,” but his work did not succeed in improving Cromwell’s “popular image.” Mantel’s fiction aims to fix that.

Part of the reason why Elton’s work “had done nothing” for the “popular image” of either Cromwell or More, however, stems from the fact that many historians do not believe Elton “established” quite as much as Mantel thinks he did. Elton provides a controversial and highly contested narrative of the period. In Elton’s portrait, Cromwell is not a student of Machiavelli and the agent of the dissolution of the monasteries; rather, he is the King’s clear-sighted advisor and the architect of the modern state. In More, Elton finds ambition, intolerance, and an altogether “conventional believer” in the bygone world of the Middle Ages. More’s adherence to the old religion, Elton thinks, prevents him from entering the “new world” of the Renaissance.

Because the plot of Wolf Hall relies on Elton’s characterizations of Cromwell and More, Mantel writes as if the last thirty years of research in the Tudor period never happened. Though many prominent historians of the period—such as John Guy, Brendan Bradshaw, and Eamon Duffy—have refuted Elton’s claims about More already, George Logan most recently assembled a team of international scholars to reassess More’s life, writings, and political actions inThe Cambridge Companion to Thomas More (2011). These scholars put to rest the most inflammatory claims of Elton and his school. Instead, Logan’s team finds More to be a superlative humanist scholar and, as the chapter on statesmanship claims, the historical record reveals “a statesman of conscience” and one of “extraordinary insight and foresight.”

More’s political acumen finds its most complex and subtle expression in his two great works, The History of Richard III and Utopia.  The first inspired Shakespeare’s own drama of the same king as well as illustrating the dangers of Machiavellian politics.  Even more famous, Utopia explores not only the challenges of those who enter politics but also how what can appear to be aEutopia or a “happy” regime, could simply constitute a Utopia or “no place,” an impractical set of political ideals. Mantel uses the latter in a reductive way, as a derisive term for More’s beliefs, suggesting how More’s “time has passed” because “Utopia, after all, is not a place one can live.”  Instead of the vision of Erasmus’s school for princes, or the imaginative wit and scope of More’s writings, Mantel trumpets Cromwell’s realpolitik as the age’s most enlightened form of political philosophy.

A Critical and Skeptical Approach to Catholicism

Media coverage of Wolf Hall, either of the book or the television series, ignores how Mantel follows Elton’s prejudice about More’s faith as well. Elton refers to More’s time spent in the Carthusian monastery—time that More devoted to prayer and discernment about whether he should become a monk—as “four idiot years.” More’s last writings, which meditate on the agony of Christ in the Garden of Gethsemane, Elton contextualizes in light of More’s final “victory” of dying upon the scaffold, which he calls More’s triumph “not only over his own fearful humanity, not only over Henry VIII, but also over God.” Yet in these same writings, More composes a speech of Christ to those, like More himself, who fear martyrdom. In More’s imagination, rather than a victory over God, he achieves victory only by meek and loving trust in God. Christ tells him, “but you, my timorous and feeble little sheep, be content to have me alone as your shepherd, follow my leadership; if you do not trust yourself, place your trust in me. See, I am walking ahead of you along this fearful road.” And More followed.

Why would Mantel find Elton’s narrative and point of view so attractive? Raised and educated as a Catholic, her opinions about the church have been well-documented in interviews since her rise to fame. In May 2012, for example, she declared the Catholic Church, because of its scandals, is “not for respectable people” and explained how the doctrine of transubstantiation—the sacramental changing of bread and wine into the body and blood of Christ—imparted to her “a great training in doubleness.” For sacramental “doubleness” is a “writer’s way of thinking—she comes in and says good morning, but she means damn you to hell.” In Wolf Hall, Cromwell’s critical and skeptical outlook about More’s Catholicism channels Mantel’s own voice, which Elton helped to shape.

Mantel’s “original understanding” is apparent in her treatment of scenes already well-known to the public, which she revises according to the beliefs of Elton. In Robert Bolt’s A Man For All Seasons, for example, Richard Rich commits perjury in exchange for the post of attorney general of Wales. More replies: “For Wales? Why, Richard, it profits a man nothing to give his soul for the whole world . . . But for Wales!” Elton, however, believes Rich actually spoke the truth about More. Thus, More is the one who refuses to tell the truth during his trial. Accordingly, Mantel’s imagination augments Elton’s judgment. InWolf Hall, the jurors simply “want the truth” of what More said to Rich. The jury finds More’s “sudden animation” in reply to Rich’s allegations to be evidence of More’s “shock and guilt” at being “confronted with his own words.” More, not Rich, appears caught in deception.

As a revision of Bolt, the contrast could not be more striking. After Mantel’s More rebukes Rich, he looks “at the jury as if expecting applause” but he finds “faces like stone.” Yet Mantel’s noble-minded jury, we know, consists of people such as the King’s courtiers, including Sir Thomas Palmer, Henry’s dicing partner, or John Parnell, a Lutheran who had filed corruptions charges against More already. Mantel paints these men as those who simply “want the truth” that More refuses to tell. The trial of More, in a final touch and tribute to Elton, vindicates Rich and condemns More.

Scholars will and should interrogate the reputation, actions, and writings of Thomas More. Yet anti-Catholic animus or simple error disguised as history or art will not advance our understanding of this complex and divided period of conflict. If we know More better today than ever before, why return to the misrepresentations of Elton?

Travis Curtright, PhD, is the author of The One Thomas More and research fellow of The Center for Thomas More Studies. This article was first published at Public Discourse and is reproduced here with permission.