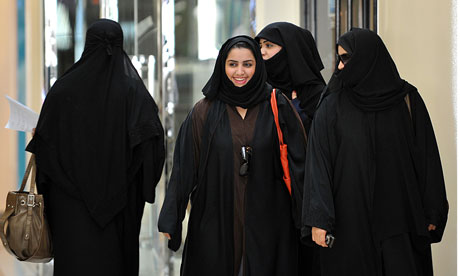 Imagine: an industrial city staffed entirely by women. From boardroom to loading bay, not a chap to be seen anywhere. Could this be the ultimate achievement of the women’s work revolution, proof that men are completely redundant to female economic wellbeing?

‘Fraid not. It’s Saudi Arabia’s answer to the conundrum of how to get women contributing to the economy while maintaining the segregation of the sexes demanded by an ultra-conservative Islamic/tribal society, the Guardian reports. King Abdullah and his government seem more liberal than the mullahs and other traditional forces on this issue.

At present, Saudi women are said to make up only 15 per cent of the workforce, and most of those work in female-only sites. Mixed work places are on the rise, but few. An increasing number of firms have been insisting that women had to be single or not pregnant to be employed. Strangely enough, given modesty concerns, until this year women had to purchase underwear and cosmetics from male staff in shops because of worksite segregation.

And, of course, women are not allowed to drive to work — or anywhere for that matter.

But what they can’t change (for the moment) Saudi women are smart enough to work around. The women-only industrial city has been proposed by a group of Saudi businesswomen. Their leader told a business paper:

“The new industrial city should have a specialised training centre to help women develop their talents and train them to work at factories. This is essential to cut unemployment among our female graduates.”

Western gender equity mullahs, however, are unlikely to be appeased. A spokesman for the authority developing the city (Modon) talked patronisingly about the project enabling women “to demonstrate their efficiency in many aspects and clarify the industries that best suit their interests, nature and ability.”

The idea that some things are better suited to women’s “nature” would cause apoplexy in UN human rights offices, where the reigning doctrine is that all gender roles are the products of culture — and a patriarchal culture at that, which is now in its death throes, and good riddance….

Indeed, it’s a long time since Rosie the Riveter signed the death warrant of men-only industries, although I don’t see many women on building sites or working as grease monkeys in garages. There is a lot of voluntary job segregation if not worksite segregation still going on in the West. However, the presence of both men and women in most work places has brought the issue of work-life balance in the interests of family life to the fore, which can only be a Good Thing.

And, anyway, who is going to drive the forklift in the Saudi women-only factories? It would be interesting to know how they solve that. But at least the driving to work problem has been taken care of:

The Hofuf development is expected to create about 5,000 jobs in textiles, pharmaceuticals and food-processing industries, with women-run firms and production lines. Modon said the Hofuf industrial site was a suitable location given its “proximity to residential neighbourhoods to facilitate the movement of women to and from the workplace”.

King Abdullah, who has been taking cautious steps towards loosening strict segregation of the sexes, has announced that women will be allowed to vote in the 2015 elections. In separate polling stations, no doubt.