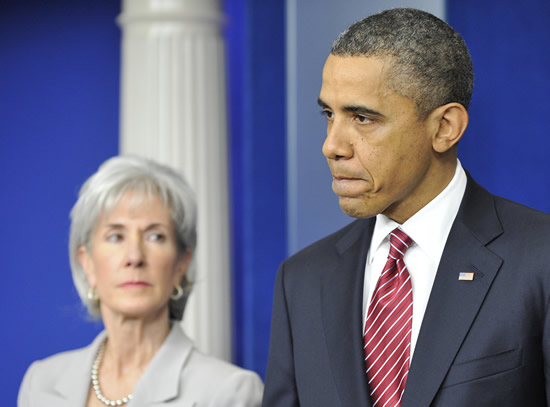 How oddly sci-fi that perceived connection has become.

There’s both science and fiction in the rendering of HHS policy by the Obama administration and its complicit media allies.

The ‘where are the women?‘ cry that resounded when a House oversight committee heard testimony from the first panel, which happened to cover religious leaders of various professions, was one dramatic moment. Fortunately, it’s been answered.

Then there’s the fact that the Obama adminstration and HHS Secretary Sebelius mandated the particular contraceptive drugs and sterilization procedures they did in the first place. Let’s take a look at that.

This column by Jenn Giroux is loaded with facts and resources, refuting pop culture notions that evolved into widely accepted truth without anyone ever proving or being asked to prove that they’re true.

The Birth Control Mandate has forced the issue of contraception to move from being the elephant in the room to center stage. Perhaps in time we will see that it was a hidden blessing for our country. For years pro-life organizations refused to discuss or take on this topic despite the fact that free access to birth control increases the number of surgical abortions[1][2]. Most people repeat over and over that birth control decreases the number of abortions. Nothing could be farther from the truth. In fact, today for every child born in the US, there are an estimated 2 children killed in the womb from both surgical and chemical, abortifacient drug abortions [3]. What isn’t being talked about is that the new mandate also pre-disposes women to serious long term and permanent health problems. In conjunction with the defense of both religious liberty and the spiritual well-being of women, we must also refute the absurd and deceptive statement that “women are healthier on birth control.”

Providing free hormonal birth control to women under the guise of ‘preventative services’ and ‘women’s health’ is a lie and women of all faiths deserve to know the truth.

So read on. She lays out a strong and substantiated case.

Perhaps HHS Secretary Kathleen Sebelius should inform her President of the following before he makes additional statements to the press like “it is cheaper to prevent than to treat.” Consider this:

— Since 1975 there has been a 400% increase in “in situ” breast cancer among pre-menopausal women under 50 years old. This mirrors the increased use of birth control over these same years. (“In situ” is a medical term which means “at the location” [4].

— A Mayo Clinic study confirms that any young girl or woman who is on hormonal birth control for 4 years prior to their first full term pregnancy increases their breast cancer risk by 52%. [5]

— Women who use hormonal birth control for more than 5 years are four times more likely to develop cervical cancer. [6]

— The International Agency for Research on Cancer (IARC), a research arm of the World Health Organization, classifies all forms of hormonal contraception as a Group 1 carcinogen. This group of cancer causing agents also includes cigarettes and asbestos. [7] Why is it that the FDA can require cigarette manufacturers to place warning labels and real life photos of corpses on cigarette packages to warn consumers of the health dangers yet they, in turn, take an equally harmful substance (hormonal birth control) and force companies to give it away free to young girls without parental consent and woman of all ages?

— For high school boys and men to take steroid drugs, it is a crime. Whereas girls and women taking steroid drugs (i.e. hormonal birth control) are now treated as if they are taking a sacred, life preserving vitamin that women cannot live without. [8]

— In October 2010 the NY Times carried an article about Hormone Replacement Therapy drugs. It quoted the America Medical Association (AMA) as warning women that these post-menopausal drugs which were originally marketed as keeping a women “young and sexy” were discovered instead to be more likely to cause advanced and deadly breast cancer.[9] It stopped short of making one other startling revelation: The only difference between hormone replacement therapy drugs which cause deadly breast cancer and the hormonal birth control drugs (now mandated by the Obama administration) is that the birth control drugs are six times the dosage — and are the very same drug!

See those footnoted numbers? They all correlate to good, sound documentation, available at the end of her column.

This is not information that should be kept from the public. Women deserve to be told the truth. They are not being warned that birth control methods are causing breast, liver, and cervical cancer. They are not being told about the “silent killer” effect which is causing them to unknowingly abort their babies. They are instead being told that they are healthier on birth control because it decreases ovarian and uterine cancer. According to the American Cancer Society, out of 100 women with cancer, 31 have breast cancer, 6 have uterine cancer, and 3 have ovarian cancer. This is not a healthy tradeoff of risks that is worth taking. [12]

If, indeed,” it is cheaper to prevent than to treat” then it is time for the White House, Kathleen Sebeilius, and all health agencies within the government to sound the warning trumpet to warn women on hormonal birth control about these devastating medical consequences.

And while we’re setting the record straight, let’s check in on the latest WaPo E.J. Dionne column that takes cover under the bogus ‘compromise’ or ‘accommodation’ President Obama purported to offer religious institutions and people with conscientious objections to his contraceptive mandate…but actually didn’t.

Can we all get one fact straight? As the president was announcing an “accommodation” in a press conference with Kathleen Sebelius on February 10 concerning the HHS contraceptive mandate, a rule was filed in the Federal Register that was unchanged (the word “unchanged” even appears four times in the final rule as filed) from the regulation the same Cabinet secretary had announced on January 20, that had been originally presented on August 1. That August rule had the narrowest of religious exemptions. And that rule was subsequently filed in the Federal Register.

Today E. J. Dionne makes reference to a compromise, suggesting that there is a bargaining table that Catholic bishops have walked away from. But there is no compromise.

As Cardinal Timothy Dolan put it, “We now have more questions than answers, more confusion than clarity.”

Confusion, of course, is exactly what the White House is counting on as a winning strategy: Characterize the debate as being simply about behind-the-times Catholics picking a fight on contraception. Insist that significant religious-liberty concerns are nothing but the Tea Party somehow having taken control of the Catholic bishops’ conference (which not so long ago Democrats would have considered a vital ally on just about anything but abortion).

Accuse the Catholic bishops of being “violently anti-woman” and “demanding that the government step in and use the force and power and police power of the state to prevent women from taking birth control because the bishops have failed,” as chief Obama administration ally National Organization for Women president Terry O’Neill has.

Allies of the White House are doing an injustice to the truth by pretending that anything was fixed on February 10, that Friday the president announced an “accommodation.” It was nothing but a wink to allies — and allies, including Planned Parenthood’s Cecile Richards, were instrumental in blessing it. To even call it a compromise, never mind accept it, is to be the cheapest of dates.

I understand that Americans want to trust their president. I understand that religious Americans might want to be unconfrontational. But, folks, our liberty in America as we know it is under attack by this administration. Defend the defenders of religious liberty here. And let’s argue with facts, not wishful thinking about good intentions.

I always say “assume good intentions” in treating contested issues and testy debates. But that’s being charitable in this case, pushing the boundaries of reason.