In an essay earlier this year, one of The Atlantic magazine’s writers coined the term “workism” to indicate the religious fervour with which Americans, particularly upper-class men, pursue their careers. Derek Thompson defined the concept thus:

What is workism? It is the belief that work is not only necessary to economic production, but also the centerpiece of one’s identity and life’s purpose; and the belief that any policy to promote human welfare must always encourage more work.

Workism may have started with rich men, but it is spreading amongst women and youth, Thompson wrote, citing research. A Pew Research report on youth anxiety found that teens ranked “having a job or career they enjoy” (95 percent) higher than any other priority, including getting married (47 percent).

A new Pew survey, Marriage and Cohabitation in the U.S., confirms that picture. Presented with five options that might be regarded as essential for a fulfilling life, the largest number of respondents put a job or career first for both men (57 percent) and women (46 percent). 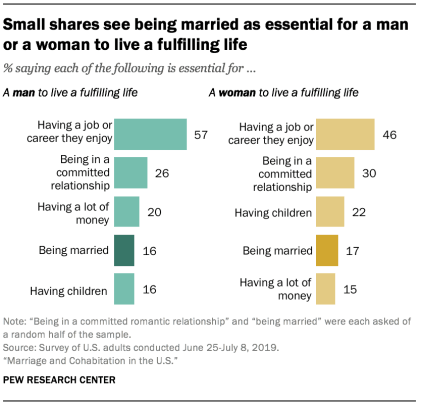 Few thought marriage essential for either men (16 percent) or women (22 percent) to be fulfilled, although 54 percent said being married is important for either sex, compared with about three in ten deeming marriage not important for a fulfilling life.

These figures have to be seen against the background of a growing acceptance of cohabitation to delay or replace marriage – the main finding of the Pew survey. Between 2002 and 2015-17, the proportion of Americans who have ever cohabited grew from 54 percent to 59 percent, while those who were ever married fell from 60 percent to 50 percent.

Young adults are particularly accepting of cohabitation – 78% of those ages 18 to 29 say it’s acceptable for an unmarried couple to live together, even if they don’t plan to get married – but majorities across age groups share this view. Still, even among those younger than 30, a substantial share (45%) say society is better off if couples who want to stay together long-term eventually get married. Roughly half of those ages 30 to 49 say the same, as do majorities of those ages 50 and older.

Of course, marriage and children are not essential for personal fulfilment – a minority of people have always lived without them — but they are essential for society. Without the stability and generosity of the married family, society crumbles into individualism, and workism seems to be a symptom of that process.  If people are indeed demanding less of personal relationships while expecting a lot of their jobs and careers, it’s no wonder that social bonds are fraying. It's not all down to “Trump”.