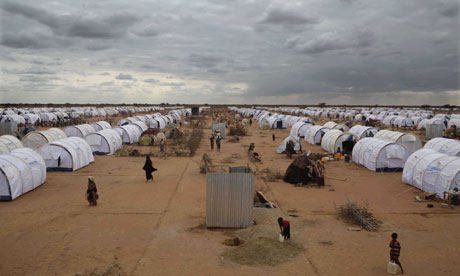 Last week it was World Refugee Day (does anyone know who authorises which cause gets which day? And are the same person who decides which cause of the week it is?). Unfortunately, this year the day is marked by a particularly sad statistic: for the first time since the World War II era, the world’s refugee population (including asylum seekers and internally-displaced persons) has passed the 50 million mark. (Of course that is, as a proportion of the global population much less than the level in the 1940s, but as a human tragedy it is quite as terrible.)

This is according to the global trends report released by the UN High Commissioner for Refugees (UNHCR). The press release states that:

“By the end of 2013, an estimated 51.2 million people worldwide were considered to be forcibly displaced due to persecution, conflict, generalized violence, or human rights violations. These included 16.7 million refugees, 33.3 million internally displaced persons (IDPs), and close to 1.2 million individuals whose asylum applications had not yet been adjudicated by the end of the reporting period.”

If you go to the press release, there are a couple of graphs, one of which depicts the number of global refugees, IDPs and asylum seekers over the last twenty years. You can see that the number has hovered in between about 33 million in 1997 and about 48 million (1993 and 1994). What has caused this number to spike to over 50 million is simply the civil war in Syria:

“In August, the one millionth Syrian refugee child was registered; only a few weeks later, UNHCR announced that the number of Syrian refugees had passed two million. ‘The Syrian Arab Republic had moved from being the world’s second largest refugee-hosting country to being its second largest refugee-producing country – within a span of just five years,’ states the report.”

You can see the rapid change that can happen in just a few years – who would have thought a few years ago that Syria would end up as it is today. Of course, the recent trouble in neighbouring Iraq is only adding to the number of displaced persons in the region. As the UN Secretary-General noted, the only thing that is going to reduce the number of refugees is peace:

“’On World Refugee Day…we honour the strength and resilience of the more than 50 million people around the world who have fled war, persecution and human rights abuses,’ declared UN Secretary-General Ban Ki-moon in his message, in which he noted that last year alone, more than 10 million people were newly displaced; every 15 minutes, a family was forced into flight.

‘Let us renew our commitment to end armed conflict, and to help the people who have been forced to flee their homes. Even one family torn apart by war is too many,’ he said.”

Unfortunately, the likelihood of peace coming to war torn parts of the world anytime soon is pretty slim. We’ve seen this year the breakout of civil war in Iraq and the violence in Syria, as well as the continuing bloodshed in Central African Republic. Peace does not seem to be threatening to break out in these places. In the meanwhile, let us hope that those displaced by conflict will find a home where they are welcomed and safe.