Prayers at the Id Kah Mosque in Kashgar, XInjiang, the largest mosque in China. Photo by Preston Rhea via Flickr Creative Commons

Following the adoption of the Chinese Communist Party’s new law on Islam, a five-year plan was launched in 2018 to “sinicize” all Chinese Muslims outside of Xinjiang. Subsequently, mosques across China are being forcibly demolished or repurposed, and their Islamic symbols removed, transforming places of worship into secular-looking buildings.

New reports sent to the online information service Bitter Winter show that the campaign is especially harsh in the province with large populations of Muslims, such as Gansu, Ningxia, Yunnan, Qinghai, and Henan.

On February 1, a mosque under construction in Minhe county, under the jurisdiction of Haidong city, in the northwestern province of Qinghai, was forcibly demolished. 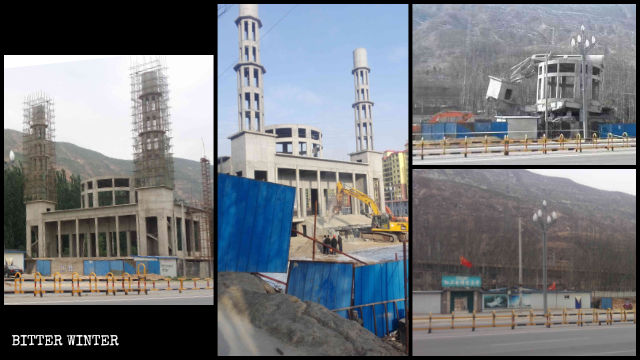 The mosque in Minhe county before and after demolition.

According to a local Muslim, the construction of the new mosque started after an old one was demolished in 2016. The county leader at the time permitted to start the construction while simultaneously applying for a land use certificate.

However, the newly-appointed top county bureaucrat claimed that the government now has a new policy that prohibits the construction of mosques. An order was issued to stop the work and demolish what has been built on the grounds that “the construction began without receiving prior approval.”

Local Muslims tried to reason with the authorities, pointing out that the Constitution provides for freedom of belief, but a government official said arrogantly, “The law that you mentioned isn’t in use; China is now under the law of Xi Jinping. Anyone who disagrees with the mosque being demolished will be sent directly to prison.”

The official prohibited people from posting any information related to the mosque’s demolition on social media, threatening to punish anyone who disregarded the order.

The mosque was being constructed with the funds raised by local Muslims; the demolition resulted in the loss of at least two million RMB (about US$300,000) of their money.

Last November, all of the Islamic symbols were dismantled from a mosque in Zhoukou city in the central province of Henan. Afterward, the mosque was converted into an activity center for seniors. The sign of the mosque in Zhoukou city has been removed.

During the takeover process, a government official claimed, “All the land belongs to the state. You cannot argue with the Communist Party; no one can change its decisions.” A sign reading “Senior Activity Center” hangs outside the mosque.

Analysts believe that the CCP’s de-Islamization policy is aimed at completely assimilating the next generation of Muslims in China. Getting rid of the places of worship and any visible Islamic symbols would make it hard for people to identify with their culture and religion.

Hayiyun Ma, a history professor at Frostburg State University in Maryland, US, said in an interview with Deutsche Welle that China’s “sinicization” drive borders on being xenophobic; by removing any signs of foreign influence, the CCP aspires to create a Chinese version of Islam that is guided by atheism. “Beijing considers the Arab influence as dangerous and believes it should be totally eliminated from the lives of Chinese Muslims,” stated professor Ma.

Anything Islam-related must go

To achieve the goal of assimilating Muslims, symbols and signs having the slightest reference to Islam are also being thoroughly eliminated from shops, streets, and residential areas.

Video: A painting of a mosque in an ethnic Hui restaurant

Even religion-themed paintings inside businesses are not spared. In late April, officials from Henan’s Gongyi city arrived at a local Hui restaurant that had a mosque hand-painted on one of its walls. The owner was ordered to scrape off the painting or cover it. Having no other choice, he placed a propaganda poster promoting the core socialist values over the painting. The painting of a mosque was covered with a propaganda poster.

“In China, people must believe in the Party and follow the Party,” one of the restaurant’s guests lamented with a sense of frustration. “A painting of a mosque angered the government so much that they decided to bring out the big guns. Apparently, the Communist Party hasn’t tolerated Islam for a long time.”

On May 2, sub-district officials from Zhengzhou city’s Zhongyuan district forcibly removed the signboard above the door of Hui restaurant “Yang’s Beef Stretched Noodles.” The sign contained crescent moon and Islamic minaret symbols, and it was therefore ordered to be removed, though, the official reason was given that it was “too wide and too high.” The original appearance of the signboard above the door of the “Yang’s Beef Stretched Noodles” restaurant.

According to an employee of the restaurant, 70,000 RMB (about $10,000) was spent to make the signboard. The restaurant owner spent another 40,000 RMB (about $6,000) to create a new signboard after the original was forcibly removed. However, it was still not to the liking of officials because it was “too Arabic,” and they ordered to make the new signboard in line with the Han style. Wang Yichi is a pseudonym for a correspondent for Bitter Winter. This article has been republished from Bitter Winter with permission.