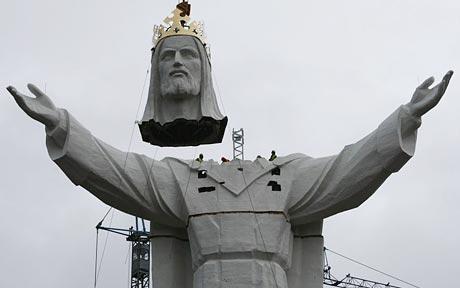 Actually, they’re divided. And it’s not so much a Protestant/Catholic tension but a divide within the Catholic Church itself. This is not news. And it’s not necessary or at all organic. The ‘peace and social justice crowd’ competes with the ‘pro-life crowd’ in the Church, as if it’s ‘either/or’ instead of ‘both/and’…

This has been going on for decades and pervaded politics prominently when John F. Kennedy ran for president. Since then, the politics have morphed into segments of both political parties reflecting segments of the Church as either the Democratic or Republican Party at prayer.

Catholic World Report focused on this, and that’s good because the more light shed on the false dichotomy…the better.

The phrase “social justice,” when invoked by members of the Catholic left, is a euphemism for the agenda of the Democratic Party. “Social justice” refers not to objective principles of justice but to specific policies of Democrats on health care, labor, welfare, and other matters…

Always late to an awareness that its trendy enthusiasms are no longer trendy, the Catholic left simply hadn’t anticipated the wave of anti-Obama feeling that swept over the country in 2010. Particularly galling to members of the Catholic left is that the Catholic vote contributed to the backlash and appears to be slipping away from the Democrats. In 2008, 55 percent of Catholics voted for the Democratic ticket. In 2010, 54 percent of Catholics voted for Republicans.

“Pro-choice” Catholic Democrats suffered heavy losses, as did many of the self-styled “pro-life” Democrats who compromised on Obama’s morally dubious health care bill.

The so-called Stupak Democrats didn’t even gain a single election, let alone the world, from their compromise. By choosing party power over principle, they put themselves into a position to lose both.

“Pro-choice” Democrats tried hard to retain the Catholic vote through the usual claim that the Democratic Party, despite its support for abortion rights and other violations of the natural law, is “better” on the Church’s “social justice concerns” than the Republicans. But this year that “seamless garment” unraveled.

Ah, there it is again. I bring this up at most of my speaking engagements, because so few Catholics – and even religion reporters who should know their material – understand this oft-cited but little understood principle. Originated by Cardinal Joseph Bernardin, Archbishop of Chicago, it was a teaching he intended as the ‘consistent ethic of life.’

It’s time for a re-read:

The case being made here is not a condemnation of either politics or technology, but a recognition with the Pope that, on a range of key issues, “it is only through a conscious choice and through a deliberate policy that humanity can be saved.” That quote from the Holy Father has unique relevance to nuclear war, but it can be used creatively to address other threats to life.

The range of application is all too evident: nuclear war threatens life on a previously unimaginable scale; abortion takes life daily on a horrendous scale; public executions are fast becoming weekly events in the most advanced technological society in history; and euthanasia is now openly discussed and even advocated. Each of these assaults on life has its own meaning and morality; they cannot be collapsed into one problem, but they must be confronted as pieces of a larger pattern.

The reason I have placed such stress on the idea of a consistent ethic of life from the beginning of my term as chairman of the Pro-Life Committee of the National Conference of Catholic Bishops is twofold: I am persuaded by the interrelatedness of these diverse problems, and I am convinced that the Catholic moral vision has the scope, the strength and the subtlety to address this wide range of issues in an effective fashion. It is precisely the potential of our moral vision that is often not recognized even within the community of the Church. The case for a consistent ethic of life—one which stands for the protection of the right to life and the promotion of the rights which enhance life from womb to tomb—manifests the positive potential of the Catholic moral and social tradition.

It is both a complex and a demanding tradition; it joins the humanity of the unborn infant and the humanity of the hungry; it calls for positive legal action to prevent the killing of the unborn or the aged and positive societal action to provide shelter for the homeless and education for the illiterate. The potential of the moral and social vision is appreciated in a new way when the systemic vision of Catholic ethics is seen as the background for the specific positions we take on a range of issues.