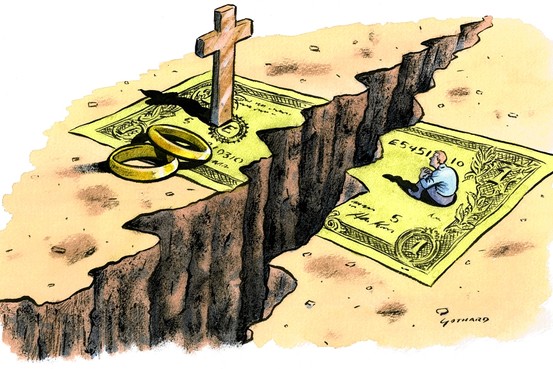 Younger working class people are drifting further away from middle class America and traditional values because they cannot find work in the changing job market. The social and political implications may be drastic.

That’s the gist of an article in the Wall Street Journal last week by sociologists Andrew J. Cherlin and W Bradford Wilcox. I am a week behind with this but the trends are not going to disappear any time soon.

Wilcox and others have drawn attention to the dilemmas of the working class before, noting for example how the “mancession” could increase the “divorce divide” between middle America and those further down the socio-economic scale.

(BTW, we are using “working class” here as shorthand. Cherlin and Wilcox say that that the real class divisions in society today are based on education.)

Now he and Cherlin point out that because younger members of this class can’t earn enough in the lower-skills jobs still available, they are not even getting married. That’s because, like most Americans, they believe that a couple isn’t ready to marry until they can count on a steady income.

Thus, in the early 1990s, 10 per cent of working class women were cohabiting when they gave birth; by the mid-2000s that figure had risen to 27 per cent — the largest increase of any educational group. Since cohab relationships are more likely to break up, their children will pay the price.

Unmarried and without steady incomes, working class men and women are abandoning religion as well. The drop off has been greatest among whites. “In the 1970s, 35% of working-class whites aged 25-45 attended religious services nearly every week, the same percentage as college-educated whites in that age group. Today, the college-educated are the only group who attend services almost as frequently as they did in the 1970s.”

Some observers might say that there’s nothing alarming about the working class’s retreat from marriage and organized religion. It’s true that not everyone wishes to marry or to worship, and that family and religious diversity can be valuable.

But the working class is not a cultural vanguard confidently leading the way toward a postmodern lifestyle. Rather, it is a group making constrained choices. For the most part, these are people who would like to marry before having kids but who don’t think they are economically ready.

In contrast, college-educated Americans—the winners in our globalized economy—are now living more traditional family and religious lives than their working-class peers. More than 90% of college-educated women are married when they give birth.

What will be the effects of this working class drift?

Will their social disengagement leave them vulnerable to political appeals based on anger and fear? Will their multiple cohabiting unions and marriages prevent their children from developing a sense of attachment to others?

This, surely, is a gap that has to be bridged — in other countries as well.