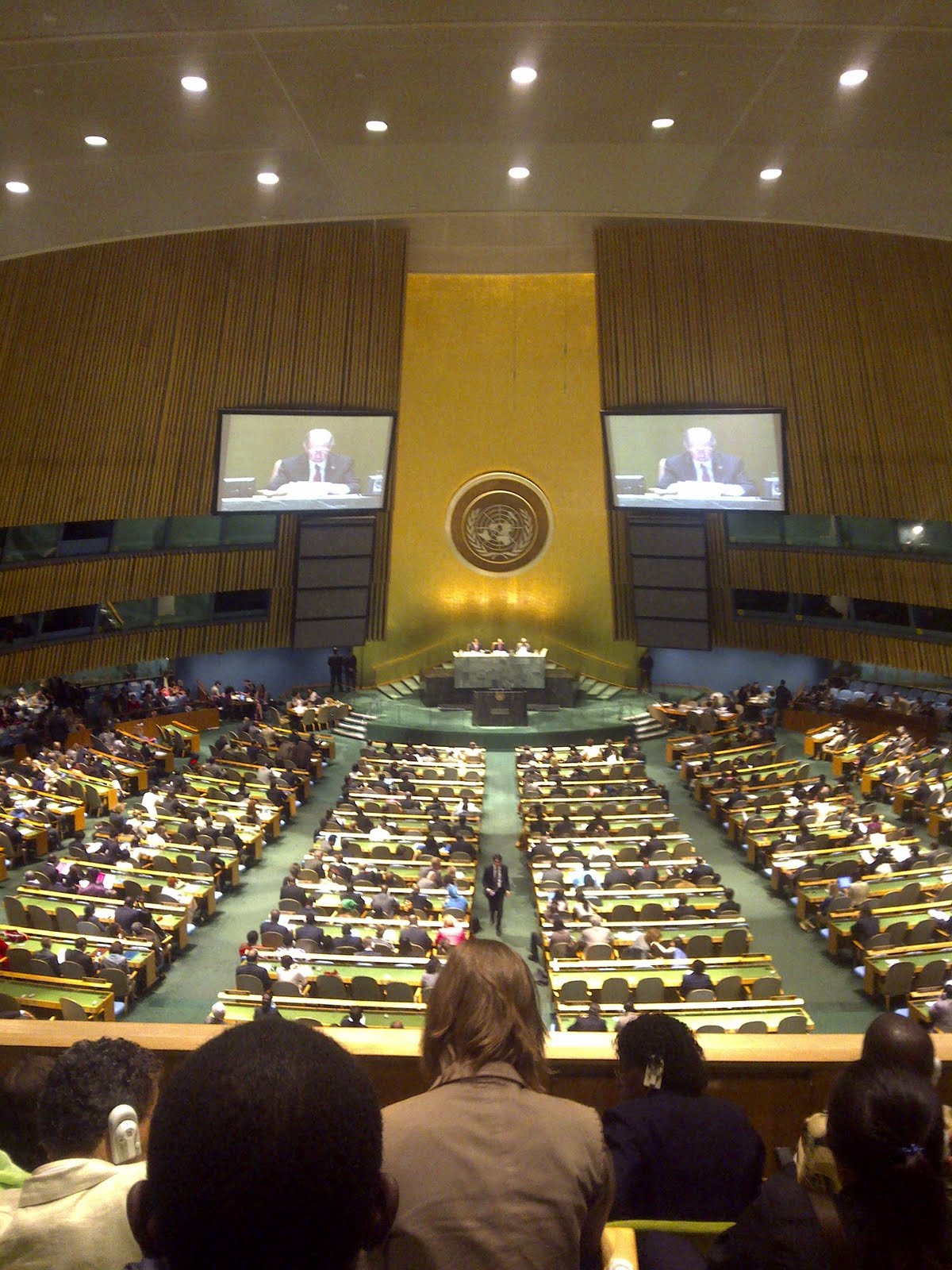 Today, a thousand or so youth activists
from around the world gather at the United Nations headquarters in New York for
a high level meeting on the theme of “dialogue and mutual understanding”. The
two-day UN
youth summit marks the culmination of an international Year of Youth that
began last August and ends on the annual UN World Youth Day, August 12th.

By that date, also, hundreds of thousands
of young Catholics will be converging on Madrid for the eleventh Catholic World Youth Day, which takes place in the
Spanish capital from August 16th to 21st. The timing of these two events is no
accident, as the late Pope John Paul II launched the first World Youth Day
gathering on the occasion of the first UN International Year of Youth in 1985
and it has taken place every three years since.

Here are two very different events which
share a common concern for the world’s youth: one at Madrid which challenges
them to change themselves, and one at New York which — as the UN WYD theme has
it — asks them to “change the world”. I would argue that the first is essential
to the realization of the second, if it is to change the world for the better.

Clearly, the Madrid festival, like those at
Denver, Rome, Sydney and Manila before it, is a mass event with over 400,000
pilgrims pre-registered – the highest number yet — and one can fairly expect
that the festive Spanish temperament will easily bring this number up to two
million during the final Mass at Cuatro Vientos, despite the likely 90 degrees
plus temperatures.

The UN youth summit, despite its important
theme and purpose as well as the participation of diplomats and ministers of
state, certainly cannot compete with the faith event in terms of numbers, nor
is it meant to. After a promising kick-off by Ban Ki Moon last August 12th, the
UN administration downscaled the final Year of Youth event under the pressure of western
member states unwilling to pay the bill, and in particular when Tunisia was
granted the bid to be host of an ambitious program in Tunis. The “Arab Spring”
and Ben Ali’s government collapse have proved this to be the right decision but
it also buried the last remains of the nineties fantasy era for large-scale UN
conferences.

But numbers are not the decisive
difference. What really matters is whether the organizers understand young
people and what will make them passionate about the ideals put before them. And
here, I believe, the Church is well ahead of the UN.

The draft resolution for the UN summit,
with its 28 points and an action plan that runs through most of the letters of
the alphabet, is a worthy document on the whole. But, too often, the UN idea of
the world’s youth looks like this (taken from the summit’s “Thematic
panel 2: challenges to youth development):

* Many young women and men are vulnerable to risky behavior related to substance
abuse, smoking and unhealthy nutritional consumption. Patterns of risky
behavior lead to excess morbidity and mortality.

* In 2009, young people aged 15 to 24 accounted for 41% of new HIV
infections worldwide, due to physical vulnerability, social inequality and
exclusion and other reasons.

Is this picture of themselves as a problem
population likely to set young adults on fire? Even if some of them are
fired up to change the world, what exactly is the vision of human dignity and
wellbeing that will carry them forward? And where can they find the personal
resources necessary for such a daunting task?

This is where the Church’s spiritual role
proves itself so necessary, and so in tune with the needs of youth. At World
Youth Day in Madrid, young people are called to be “planted and built up in
Jesus Christ, firm in the faith”. Young pilgrims will pour into Madrid animated
by a thirst to deepen and celebrate their faith life together during
catechesis, prayer vigils and various cultural manifestations. Moreover, for almost thirty
years participants in the World Youth Day have taken seriously the call from
John Paul II and now Benedict XVI to build just societies free from
totalitarianism and attacks upon the human person.

The good news is that some young people
will participate in both the UN and Catholic WYD events.

One unique illustration of how the
authentic experience of truth at World Youth Day has transformed millions of
individual lives and fertilized our societies for good can be found in the
World Youth Alliance. Created in 1999, this global coalition is made of young
people ages 10 to 30 from various faiths and diverse backgrounds, who share
John Paul II’s finest legacy: a strong philosophy of the human person and a
passion to engage in dialogue with the world. The young members of the World
Youth Alliance from over 160 countries promote the intrinsic dignity of every
person and share it in the academic, cultural and political arenas.

There should be no surprise then that such
an organization is present in Madrid this summer. Young Catholics face daily
challenges to their beliefs in a particular way when they come across
burgeoning theories on gender as a cultural construct, abortion as a human
right or the redefinition of family. The ability to articulate an account of
the value and dignity of life comes from an experience of one’s own dignity,
education on the human person and an experience of solidarity with others. This
is what enables a young person to defend the person in every way in which it is
attacked, from human trafficking and child pornography, to abortion and
population control policies. Arriving at such an experience of the person – and
the capacity to defend it – is the point of WYA’s activities at all times, and,
in a particular way, at WYD.

When in Rome in 2000, I was one of the 2
million whose heart was touched by John Paul II. The old man who survived and
fought Nazism and Communism told us to “strive to the highest aspirations and
ideal.” Like other pilgrims that day, as at the multiple sendoffs closing each
WYD, I did not just harbor these words for myself. These words have guided my
life and career and this charge resonates within me still today. World Youth
Day is not a “VIP and devout only” gathering, but rather a foundational
experience of humanity for millions of young people who are nowadays doing
their best to be “the salt of the earth” with patience and humility.

John Paul II’s call to “strive to the
highest aspirations and ideals” was not one that should be limited to the
private practice of one’s faith but by nature must also be lived out in the
public square. This is one of the reasons why an organization like the World
Youth Alliance is equally present in the hallways of the UN for the High Level
Meeting on Youth as we are in Madrid for WYD later this summer. Today, as 25
years ago, the number of young people taking up this challenge is growing.
Forty well trained members of the World Youth Alliance from 18 to 30 have
raised money for their visa and flights to speak to diplomats and NGOs at the
UN meeting while a similar number will engage pilgrims in the hot streets of
Madrid realizing that both events provide important platforms to engage the
world on issues of life, the family, and human freedom.

On June 28th the World Youth Alliance
sponsored an event in Brussels where elected members of the European Parliament
from the major political parties across the board recognized World Youth Day’s
support in building solidarity, freedom and democracy, and reconciling Europe.
These expressions of civic engagement are the gift of the Church to the world
and I would dare to say that both the Secretary General of the UN and the Pope
must be proud of it.

François
Jacob is the President of the World Youth Alliance, a global coalition of young
people dedicated to promoting the dignity of the human person in policy and
culture and to building solidarity between young people of developing and
developed nations.

none More by Francois Jacob